HCI in Business, Government, and Organizations: eCommerce and Innovation 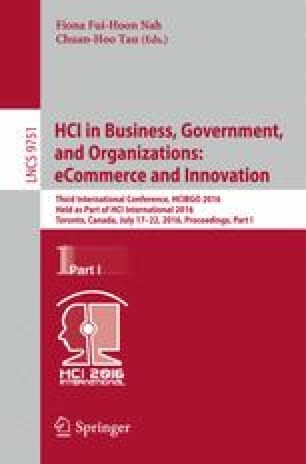 International Conference on HCI in Business, Government, and Organizations

HCIBGO 2016: HCI in Business, Government, and Organizations: eCommerce and Innovation pp 129-140 | Cite as

Social media is an integral part of the web, and it is becoming even more important when it comes to employment prospects. People with disabilities already find it difficult to access employment and any web sites that are inaccessible to them makes the issue that much harder. LinkedIn is one social network that is becoming essential for employees in the twenty-first century. A subset of requirements from the W3C Web Content Accessibility Guidelines were used to test how accessible LinkedIn is to people with disabilities. A large number of issues were found, indicating that LinkedIn is not an accessible social network and is unlikely to provide the same functionality to people with disabilities using the system as those provided to the general public.

Social media is an incredibly important tool in modern society. There are five main reasons people access social media: personal (such as sharing photos on Instagram), work (such as finding jobs on LinkedIn), entertainment (such as following celebrities on Twitter), provision of goods and services (such as responding to user complaints on Facebook) and education (such as watching instructional videos on YouTube) [1]. It is not just the young who access social media, with close to 30 % of people over the age of 65 interacting on social networking sites, and 50 % of people aged 50–64 [2].

As the percentage of recruiters who use LinkedIn to review job candidates is now 95 % [4], this social network is integral to one’s employment prospects. With over 414 million users [5] (including over 120 million registered members in the US [6]), two new users every second [5] and 3 million active job listings at any one time [7], it is a formidable network.

When it comes to LinkedIn, one’s success is greatly improved by interacting with the network. For example, adding a professional photo to one’s profile means that one is fourteen times more likely to be found in LinkedIn [11]. Adding skills to one’s profile increases one’s views thirteen times [12]. The number of comments on a LinkedIn post doubles if that post contains an image [13]. Therefore, LinkedIn is not just about creating a profile, but updating it as required. It is therefore essential that these features are fully accessible.

Web accessibility of web sites is best achieved by following the Web Content Accessibility Guidelines, Version 2.0. The World Wide Web Consortium (W3C) has worked in the area of web accessibility since 1998 and they have developed a set of recommendations called the W3C Web Content Accessibility Guidelines, which have been endorsed around the world. The W3C states that “following these guidelines will make content accessible to a wider range of people with disabilities, including blindness and low vision, deafness and hearing loss, learning disabilities, cognitive limitations, limited movement, speech disabilities, photosensitivity and combinations of these” [16].

2 Methodology for Testing the Accessibility Compliance of Social Networks

The LinkedIn web site and mobile app was tested against the W3C Web Content Accessibility Guidelines on a desktop computer, an iPhone and an Android phone.

The following pages were tested:

This success criterion requires that important information about the content be coded so that it can be interpreted by assistive technologies. For example, headings can be coded in a particular way so that screen reader users can access a list of headings in the page, and therefore access an overview of the content of the page.

This success criterion was tested manually by reviewing the code of a social media site and with Chris Pederick’s FireFox Web Developer Toolbar [17] using the following features:

This success criterion requires that the colour contrast between foreground text and the background meets certain requirements. People with failing eyesight and people who are colorblind have difficulty reading content with low colour contrast. Approximately 8 % of men are colorblind [18], therefore it is a common ailment (although it is not defined as a disability). Due to the high prevalence of colorblindness amongst the general population this success criterion was deemed integral to the accessibility compliance of the LinkedIn web sites, despite the fact that it is in the Level AA (medium) category, not the minimum category.

This success criterion was tested using the Paciello Group’s Colour Contrast Analyser [19]. Items that were deemed mandatory to understanding and interacting with the social media site were tested for adequate colour contrast.

This success criterion requires that all content and functionality in a web site be accessible via the keyboard. A number of different physical disabilities restrict a user’s ability to use a mouse, and these people often rely on a keyboard to access a site. Keyboards can also be implemented with mobile devices, for people who have difficulty using the touchscreen feature.

This success criterion requires that any component that can be entered via a keyboard can also be exited via a keyboard. There are some instances where features, such as video players, trap the keyboard focus and the user cannot escape the feature. In order to continue using the site the user must close the browser and begin again. Success Criterion 2.1.2 is one of the four “non-interference” success criteria in WCAG2 [20]. These four success criteria must be met across an entire site, even if part of the site is deemed to be inaccessible. Failing one of these four success criteria interferes so significantly with some user’s interaction with the site that it is deemed a critical failure.

This success criterion requires that users that can only access content sequentially can jump over repeated content such as navigation straight to the body of the page. One of the most common methods of achieving this is to provide “skip links” which provide an anchor link to the content of the page. According to WCAG2, skip links must be the first focusable link on a page [21]. For example, this allows screen reader users to jump past the navigation, which, if there were no skip links, would be repeated on every page that they visit.

This success criterion requires that the order of content is meaningful to the user. There are three different content orders:

This success criterion was tested in conjunction with Success Criterion 2.1.1: Keyboard, by manually reviewing the visual order of the content on the page and by displaying the content with style sheets disabled using an internal AccessibilityOz FireFox bookmarklet.

This success criterion requires that an element that has keyboard focus is visually indicated to the user (“keyboard focus indicator”). If this is the case, the user can easily follow keyboard movement through the page, and activate appropriate items. Where items do not have a highly visible keyboard focus indicator the user will not know where on the page their focus is located. This makes a site incredibly difficult, if not impossible to use. As this is a feature that is essential to keyboard-only users in interacting with a site it was deemed integral to the accessibility compliance of the LinkedIn web site, despite the fact that it is in the Level AA (medium) category, not the minimum category.

3 The Accessibility Compliance of Social Media

3.1 Results of Testing Against the W3C Web Content Accessibility Guidelines

Surprisingly the LinkedIn site does not have many images, however they all include accurate ALT attributes. Unfortunately, there is no way for a user, when posting a status with an image, to add an ALT attribute to that image. As a result, all images added to a status or a post have empty ALT attributes.

The forms in LinkedIn have been coded appropriately as specific form elements. This should make it straightforward for screen reader users to access the site.

Headings have been coded in the site, however the hierarchy of the headings are incorrect. In the example below the text ‘Platinum Asset Management Limited shared:’ is a heading 3. The article title ‘Sugar addiction – breaking the cycle’ is a heading 4. However, the names of the commenters on the article (‘Alan Wallace’, ‘Brett Elliott’) are also coded as heading 4 (see Fig. 1). These commenter names are sub-headings to the article name and should be coded as a heading 5.

When creating an account some important features are not keyboard accessible, including the ability to skip importing contacts (see Fig. 4), and sending another email if the original email was not received (see Fig. 5).

Some features are not keyboard accessible, such as saving, publishing or formatting functions when adding a post (Fig. 6).

When first accessing the site as a new user a popup appears over the top-left navigation with information about messaging (see Fig. 7). This popup cannot be closed by the keyboard. In addition, a user tabbing through the navigation will not be able to see the items currently in focus as they are overlapped by the popup. This is referred to as a ‘reverse keyboard trap’ [22] – where content cannot be closed with the keyboard and this content overlaps important information. This can only be closed by leaving LinkedIn and logging in again – on subsequent logins this popup does not appear.

LinkedIn contains quite detailed skip links. There is a popup available on keyboard focus that allows users to jump to sections such as profile activity, update status, network updates and search (see Fig. 8).

4.1 Why Is Social Media Inaccessible?

The main reason why social media is not accessible is that social networking sites and apps are almost continually refreshed. Facebook sometimes changes twice a day [23]. This, coupled with a lack of a formal testing process, means that what may be accessible today may be literally gone tomorrow. Although there have been some improvements in the accessibility of social networks over the last year; namely the removal of a CAPTCHA in the signup process for LinkedIn, any accessibility features can be instantaneously lost as the site or mobile app is updated.