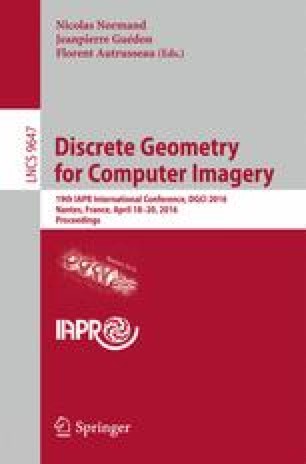 Although the concept of functional plane for naive plane is studied and reported in the literature in great detail, no similar study is yet found for naive sphere. This article exposes the first study in this line, opening up further prospects of analyzing the topological properties of sphere in the discrete space. We show that each quadraginta octant Q of a naive sphere forms a bijection with its projected pixel set on a unique coordinate plane, which thereby serves as the functional plane of Q, and hence gives rise to merely mono-jumps during back projection. The other two coordinate planes serve as para-functional and dia-functional planes for Q, as the former is ‘mono-jumping’ but not bijective, whereas the latter holds neither of the two. Owing to this, the quadraginta octants form symmetry groups and subgroups with equivalent jump conditions. We also show a potential application in generating a special class of discrete 3D circles based on back projection and jump bridging by Steiner voxels. A circle in this class possesses 4-symmetry, uniqueness, and bounded distance from the underlying real sphere and real plane.

Discretization models and their combinatorial structures have drawn a stronger attention of the research community over the last couple of decades [17, 18]. Several series of works have been reported on characterization and modeling of different geometric objects like planes and hyperplanes, spheres and hyperspheres, polygons and polytopes, and the like, in the framework of digital geometry. The underlying concepts often vary one from the other while imposing additional criterion one over another. For example, a naive plane is discretized to satisfy the minimality in the number of constituent voxels along with the topological condition of separating the discrete space. However, the very condition of minimality is prohibitive to devising a proven mechanism for discretization of Euclidean primitives like lines, segments, triangles, or polygons as connected voxel sets on a naive plane. The ‘naive model’ of discrete plane is subsequently enhanced to ‘graceful model’—first introduced in [8] and studied later in detail in [9, 10, 11, 12].

It is the functional plane that plays the leading role in characterization and construction of a discrete plane to its graceful model. As shown in [8], jumps are the root cause behind the failure of naive plane in construction of Euclidean primitives on its surface. It is worth mentioning here at this point that combinatorial configurations of jumps are given by the orientation of the functional plane. For the formal definitions of naive plane, graceful plane, jumps, and functional planes, we refer to [8, 9].

The above concept, as a whole, is also relevant to discrete sphere and has the potential to address many theoretical issues in the context of primitive construction on a discrete spherical surface. No perceivable progress is however noticed in this line, which drives us to take up this work. To the best of our knowledge, this is the first work of its kind, which provides a new insight of analyzing the topological properties of discrete sphere in the integer space. More importantly, it indicates the immense possibility to make out symmetry groups and their topological characterization for various other 3D objects, a few of which evidently being hypersphere, ellipsoid, and hyper-ellipsoid.

We summarize here the theoretical results obtained by us. The proofs and related details are discussed in the subsequent sections.

A naive sphere is made up of 48 basic symmetric parts, which are called quadraginta octants, or q-octants in short [3, 6]. In this paper, we show how these 48 q-octants give rise to 3 groups when characterized by their respective functional planes (FP). Each group is further subdivided into two subgroups, each having a unique combination of its para-functional plane (PP) and dia-functional plane (DP) defined by jump configurations. We show how mono-jumps occur from FP and PP, and multi-jumps from DP, while taking back projection from them to the naive sphere. Figure 1 shows the 1st q-octant of a naive sphere, its projections on the three coordinate planes, and their respective jumps. Figure 2 illustrates how jumps in different q-octants are bridged by inclusion of some additional voxels in the naive sphere. By analogy to other geometric problems, we refer to these voxels as Steiner voxels.

The grouping of q-octants results to a functional gradation of the coordinate planes against the q-octant groups. Figure 3 shows an example. This, in turn, eventually leads to characterization and modeling of a special class of discrete 3D circles on the surface of a naive sphere, once we bridge the jump voxels by requisite Steiner voxels. We call these circles ortho-coordinate circles, as they are orthogonal to one of the three coordinate planes. Their construction is efficiently doable by a technique based on back projection from a coordinate plane based on its functionality w.r.t. the concerned q-octants and their group properties.

In this section, we fix some basic notions and notations to be used in the sequel. For more details, we refer to [17]. We also go through the concepts from previous researches which deem useful in the context of our work.

By discretization, we mean rasterization or voxelation of a real object (curve or surface), subject to certain topological constraints. The notion owes its origin to computer graphics and geometric modeling [7, 14, 15, 16].

For \(l\in \{0,1,2\}\), an l-path in a 3D discrete object A (or the discrete space \({\mathbb {Z}}^3\)) is a sequence of voxels from A such that every two consecutive voxels are l-adjacent. The object A is said to be l-connected if there is an l-path connecting any two points of A. An l-component is a maximal l-connected subset of A.

Each coordinate plane serves as the functional plane (FP) of 16 specific q-octants, as evident from the following lemma.

By Lemma 1, we get the FP for a q-octant and hence can apply the tandem configuration used for a graceful plane with the same FP. This owes to two facts: (i) \({\mathsf {S}}_{r}^{({t})}\) has bijection with its FP projection; (ii) exactly one Steiner voxel can bridge a jump corresponding to FP (we prove it shortly), and such jump is a mono-jump. Jumps other than mono-jumps are called multi-jumps.

For a mono-jump, a Steiner voxel can be put either outside or inside of \({\mathsf {S}}_r\), in between the voxels forming the mono-jump in order to bridge them, according to its intersection with \(S_r\), ensuring its belongingness in the standard sphere [4]. Figure 4 shows the projection of \({\mathsf {S}}_{r}^{({1})}\) on its FP (xy-plane), the resultant mono-jumps, and the bridging Steiner voxels. See also Fig. 2, which shows how Steiner voxels are inserted for bridging all mono-jumps.

For the two coordinate planes other than the one forming FP for \({\mathsf {S}}_{r}^{({t})}\), we do not get a bijection with its projection on either of them. Specifically, for these two non-functional planes, a run of voxels (2-path with two common coordinate values) gets projected to a single pixel. We categorize them as para-functional plane (PP) and dia-functional plane (DP), and define as follows.

We have the following theorem on mono-jumps.

To prove the same for PP, observe that \({\mathsf {S}}_r\) is a collection of digital annuli, where, a z-value in \([-r,r]\) corresponds to a digital annulus bounded from inner and outer by two digital circles (as closed 0-paths) with real radii and (0, 0, z) as their common center. By construction of \({\mathsf {S}}_r\), the part of a (inner/outer) digital circle within \({\mathsf {S}}_{r}^{({1})}\) always has a unique y-value for a given x-value. If a multi-jump occurs, then the concerned digital circle does not remain a closed 0-path. Therefore, a jump corresponding to PP is always a mono-jump. \(\quad \square \)

A DP may contain coincident projection pixels for several runs of voxels from the q-octant. Also, to connect the runs whose projections are adjacent, we may need more than one Steiner voxel—a case of multi-jump (Fig. 7). We have the following corollary.

(DP Jumps). Jumps corresponding to DP are mono- or multi-jumps.

The following lemma explains the way of determining FP, PP, and DP for any q-octant of \({\mathsf {S}}_r\).

We refer back to Fig. 3 to visualize the distribution of q-octants by functional gradation of coordinate planes, which eventually leads to group and subgroup formation.

Figure 8 shows a demonstration. A circle \({\mathsf {C}}_{r}^{\langle {a,b,c}\rangle }\) is unique for a given specification and conforms to 4-symmetry, since only the blue part needs to be generated by the algorithm, and the others just follow the symmetry. Due to the method of selection of Steiner voxels, each voxel of \({\mathsf {C}}_{r}^{\langle {a,b,c}\rangle }\) belongs to the naive plane with normal \(\langle a,b,c \rangle \), and also to the standard sphere with radius r, thus giving an upper bound of isothetic distance \(\frac{1}{2}\) from the real plane \(\langle a,b,c \rangle \) and of 2 from the real sphere with radius r. A detailed study on isothetic distance bounds for plane and sphere can be seen in [4].

The analysis and gradation of coordinate planes in view of their functionality is a novel proposition in this paper. Being 48-symmetric, a naive sphere can be divided into groups and subgroups based on this gradation. This grouping would have various applications, as shown by us for one such, in generating a special class of 3D circles lying on the sphere. In higher dimensions, the scope and challenge would be higher and better, as we foresee. Characterization of para-functional plane seems also interesting for objects like discrete planes and hyperplanes, which is yet to be studied.