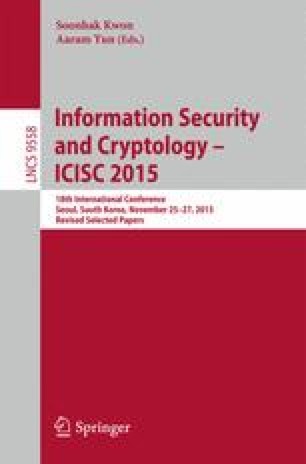 LowMC is a family of block ciphers developed particularly for use in multi-party computations and fully homomorphic encryption schemes, where the main performance penalty comes from non-linear operations. Thus, LowMC has been designed to minimize the total quantity of logical “and” operations, as well as the “and” depth. To achieve this, the LowMC designers opted for an incomplete S-box layer that does not cover the complete state, and compensate for it with a very dense, randomly chosen linear layer. In this work, we exploit this design strategy in a cube-like key-recovery attack. We are able to recover the secret key of a round-reduced variant of LowMC with 80-bit security, where the number of rounds is reduced from 11 to 9. Our attacks are independent of the actual instances of the used linear layers and therefore, do not exploit possible weak choices of them. From our results, we conclude that the resulting security margin of 2 rounds is smaller than expected.

A Application to Other Parameter Sets

For \(\text {LowMC-128}^{\text {256},\text {63}}\), the attacks of Sect. 4.1 apply for the same number of rounds, with the same complexity. Furthermore, due to the increased logarithmic data complexity limit, an additional round can be added here (for a total of 8 rounds), and the data complexity increased accordingly. However, the size of the identity part, \(\ell =67\), is too small to append rounds with initial-key-guessing as in Sect. 4.2: the necessary number of about \(3 \cdot 40\) guessed S-box key bits becomes prohibitive. Final-key-guessing as in Sect. 4.3, on the other hand, is applicable in a similar way. Again, the smaller identity part increases the complexity: instead of masks b with 6 active S-boxes, about 24 active S-boxes are necessary for a reasonably high probability. If the correct \(3 \cdot 24\)-bit subkey is recovered as described in Sect. 4.3, the computational complexity is about \(2^{72}\) (for up to 9 rounds). However, it is possible to optimize this step at the cost of a slightly higher data complexity.

We want to stress that all described attacks are generic for the design of \(\mathrm {LowMC}\), without requiring specific instances of the linear layer \(f_L\) or the key schedule matrices. For specific “weak” choices of the random matrices, it is likely that attacks on more rounds are feasible.