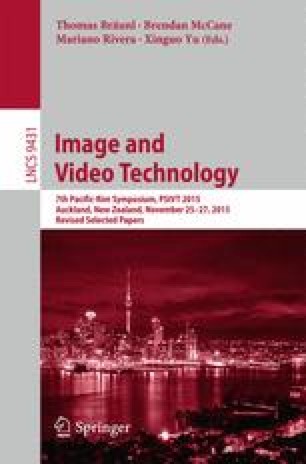 A robust scheme for identifying JPEG XR coded images is proposed in this paper. The aim is to identify the images that are generated from the same original image under various compression ratios. The proposed scheme is robust against a difference in compression ratios, and does not produce false negative matches in any compression ratio. A new property of the positive and negative signs of lapped biorthogonal transform coefficients is considered to robustly identify the images. The experimental results show the proposed scheme is effective for not only still images, but also video sequences in terms of the querying such as false positive, false negative and true positive matches.

The use of digital images and video sequences has greatly increased recently because of the rapid growth of the Internet and multimedia systems. It is often necessary to identify a certain image in a database that has a large number of images in various types of the applications of digital images/videos, such as security and evaluation of image validity. The image database generally consists of images in a compressed form to reduce the amount of data. Several international standards for searching for images/videos have been developed [1, 2, 3, 4] in connection to this. “Identification” in this work is defined as the operation of finding an image that is identical to a given original image from an image database. In this paper, a robust scheme for identifying JPEG XR coded images is proposed.

JPEG XR is an image coding standard from the JPEG committee [5, 6]. It allows lossy and lossless coding for still images and videos. It supports not only images with 8 bits but also images with over 8 bits and floating point representation. Thus, it can support various kinds of images including high dynamic range(HDR) images [7, 8, 9] for a new generation of digital cameras. Therefore the proposed scheme is widely available for identifying many kinds of images.

So far, several schemes have been developed for identifying compressed images [10, 11, 12, 13, 14, 15, 16, 17, 18, 19]. The schemes described in [13, 14, 15, 16, 17] are for the JPEG standard, and the schemes in [17, 18, 19] are for the JPEG 2000 standard, where some properties of transform coefficients i.e. DCT(Discrete Cosine Transform) and DWT(Discrete Wavelet Transform) coefficients, play an important role for image identification. In addition, they have been extended to image identification schemes in the encrypted domain securely to operate images/videos [20, 21]. However, there is still none for the JPEG XR standard. Moreover the previous schemes are not available for JPEG XR images, because JPEG XR is the only image coding standard that uses a lapped biorthogonal transform(LBT), which is different from DCT and DWT [22].

Because of this situation, a scheme for identifying JPEG XR coded images is considered in this paper. The aim of the proposed scheme is to identify JPEG XR images that are generated from the same original image under various compression ratios. The proposed scheme does not produce false negative matches in any compression ratio. A new property of the positive and negative signs of LBT coefficients is utilized to identify the images. The experimental results shows the proposed scheme is effective for not only still images, but also video sequences in terms of the retrieval performance such as false positive, false negative and true positive matches.

A simplified model of the image identification system is shown in Fig. 1. The system consists of three components: namely, a client (user), an image identifier, and a database. The database may contain various types of data, such as compressed images, parameter (feature) of the images, and image information (metadata). An identification is initialized by the user, by sending a query, which can be any kind of the data mentioned above to the image identifier. Then the image identifier checks the availability of the query in the database. Afterwards, if the query information is available, it can be directly sent or confirmed to the user. This paper focuses on querying some properties of JPEG XR images.

There are numerous applications for the previously mentioned identification model. Some examples are described in the following.

JPEG XR is an image coding standard from the JPEG committee. It allows lossy and lossless coding for still images and videos. It supports not only fixed point representation but also floating point representation. Thus, it can support various kinds of images including HDR images for a new generation of digital cameras.

The block diagram of JPEG XR encoding is illustrated in Fig. 2. JPEG XR is based on a block transform design, and it uses some of the same high level building blocks as in most image compression schemes, such as color conversion, spatial transformation, scalar quantization, coefficient scanning, and entropy coding. The encoding consists of the following basic steps:

Several notations and terminologies used in the following sections are listed here.

The proposed scheme focuses on the positive and negative signs of LBT coefficients, which can be obtained by entropy-decoding from JPEG XR bit streams. It is verified that quantized LBT coefficients have the following property.

The above property, which can be theoretically explained, is illustrated in Fig. 5. Figure 5(a) and (b) are examples of quantized LBT coefficients of images Q and \(D_1\) that are generated from the same original image O. It is confirmed that the positive and negative signs of LBT coefficients of the two images are equivalent in the corresponding location, except for the case in zero-value coefficients. On the other hand, image \(D_2\) in Fig. 5(c) that is generated from the other original image, does not have the same signs as those in Fig. 5(a). In this manner, there is no guarantee that two images generated from different original images have the same signs. Note that the number of zero-value coefficients depend on quantization parameters (QPs).

Let us define image Q as a JPEG XR coded image that is given by user (a query image) and image \(D_i\) is a JPEG XR image that is given from a database \({\varvec{D}}\), where \(D_i \in {\varvec{D}}\) (see Fig. 6). The positive and negative signs of the quantized LBT coefficients of the images Q and \(D_i\) in the corresponding locations are compared, and the results are used to decide whether the images are compressed from the same original image.

When compressed image Q and image \(D_i\) (\(i = 1, 2, \cdots \)) are compared, the identification algorithm is accomplished according to the following steps.

To evaluate the performance of the proposed scheme, several simulations are conducted.

The simulation conditions are presented in Table 1. Two still images with \(8\times 3\) bpp(bit per pixel), two still HDR images with the OpenEXR format (\(16\times 4\) bpp) [23] and three video sequences, i.e. “Mobile”, “Flower” and “Deadline” were used in the simulation (Fig. 7). “Mobile” and “Flower” are in a class of images with large object movements between subsequent frames. “Deadline” is vice versa. All images were compressed with 9 different quantization parameters (QP). In the following section, for example, “Mobile” frame No.5 with \(QP=10\) will be referred to as “Mobile5-10”. The JPEG XR reference software 1.8 [24] was used in the simulation. The simulation was run on a PC, with a 2.7 GHz processor and a main memory of 16 Gbytes.
Table 1.

Four still images including HDR ones were compressed with nine different quantization parameters (QPs) shown in Table 1 to generate 36 compressed images, of which four images with \(QP=50\) were in the database \({\varvec{D}}\), and \(4\times 9=36\) compressed images were used as a query image. The original uncompressed versions were not included in the simulation. Identification was accomplished by querying a compressed image.

Querying results for videos are shown in Table 3. From the results, it is confirmed that a larger L proves higher recognition accuracy and a smaller QP also gives higher one, because these conditions enable to supply a large number of the positive and negative signs of LBT coefficients to image identifier. In particular, for \(L = P\), querying with all QPs resulted in a perfect identification for all video sequences. The performance trends can be reconfirmed via \(F_1\)-scores as shown in Fig. 8. Besides, compared to “Mobile” and “Flower”, \(F_1\)-scores decrease for “Deadline”, since it does not include large objective movements between subsequent frames. For all conditions, it is worth noting that there were no false negatives.

Figure 9 shows examples of compressed frames with different QPs, where PSNR(Peak Signal to Noise Ratio) is a measure of image quality. From these examples, it is shown that the successive frames are very similar and moreover compressed frames include large amount of quantization noise in general. The proposed scheme enables to detect the slight difference between frames, even though there is such a situation.
Table 3.

A novel scheme for identifying JPEG XR images in the compressed domain has been proposed in this paper. The conventional schemes for compressed images are not available for JPEG XR images, due to the use of a LBT. A new property of the positive and negative signs of LBT coefficients has been considered robustly to identify the images. The proposed scheme does not produce false negative matches in any compression ratio. The experimental results have showed the proposed scheme is effective for not only still images, but also video sequences in terms of the retrieval performance such as false positive, false negative and true positive matches. In particular, in the case of using DC and LP coefficients, i.e. \(L = MN\), querying with all QPs resulted in a near-perfect identification for all images and videos. The proposed scheme will be extended to a identification scheme in the encrypted domain as a future work.