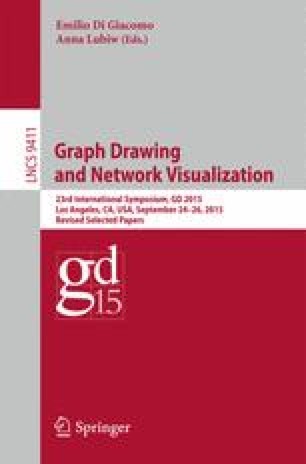 On Minimizing Crossings in Storyline Visualizations

Storyline Visualization Heavy Path Decomposition Event Graph Layered Graph Drawing Optimal Linear Ordering
These keywords were added by machine and not by the authors. This process is experimental and the keywords may be updated as the learning algorithm improves.
Download conference paper PDF

We focus on a simplified version of the storyline problem, where each event consists of exactly two characters, and these characters meet exactly once in \(\mathcal {E}\). For this simplified version, we can represent our events as a graph where every vertex is a character, and every edge is a meeting of the corresponding characters. We call this graph an event graph (Fig. 1, right).

Let our event graph be a tree T with n nodes. Then we show that we can always draw a storyline visualization with \(O(n\log n)\) crossings. Our result relies on decomposing T into disjoint subtrees that are drawn in disjoint axis-aligned rectangles. We reach this bound by using the heavy path decomposition technique [8].

Any pairwise single-meeting storyline with a tree event graph has a storyline visualization with \(O(n\log n)\) crossings.

For every edge \(e=(i,j)\in G\) define its cost \(c_t(e)\) to be the number of characters between i and j on the vertical line at any given time t.

When two character curves cross, their corresponding vertices u and v swap in the embedding of G on the vertical line. Notice that, after the swap, the costs of edges incident to u or v change by \(\pm 1\), and there is no change for non-incident edges. Thus, the crossing changes the cost of at most \(\mathrm {deg}(u)+\mathrm {deg}(v)\) edges in G.

Any storyline visualization with an event graph G requires \(\varOmega (\frac{L^{*}-m}{2\varDelta })\) crossings, where \(L^{*}\) is the total edge length of the optimal linear ordering of G, and \(\varDelta \) is the maximum degree of G.

3 An FPT Algorithm for the Storyline Problem

We now consider general storylines, where any number of characters may participate in an event, and we have no restrictions on the event (hyper)-graph structure. The general storyline problem is NP-complete, by a straightforward reduction from Bipartite Crossing Number [4]. However, in real-world storylines, there may be only a few characters of interest and these characters participate frequently in events. We therefore are interested in a parameterized algorithm to better capture the complexity in this scenario. Let \(k = |C|\) be the number of characters in a storyline, and let \(m = |\mathcal {E}|\) be the number of events. We show that the storyline problem is fixed-parameter tractable when parameterized on k. A problem is said to be fixed-parameter tractable if it can be solved in time \(f(k)m^{O(1)}\), where f is some function of k that is independent of m.

For storylines with k characters and m events, we can solve the storyline problem in time \(O(k!^2k\log k + k!^2m)\).

We show how to reduce the storyline problem to finding shortest path in a graph. For each time interval \([s_i,t_i]\) in the storyline we take its start time \(s_i\) and create a vertex for each of the O(k!) possible vertical orderings of the curves that satisfy the event groupings at \(s_i\). We denote the vertices for time \(s_i\) by \(v_{i,j}\), where \(1 \le j \le k!\), and say these vertices are on level i.

Now a minimum-weight path from s to t fully specifies a storyline visualization. We can lay out each curve by the vertical ordering specified by each vertex on the path with its time step, swapping curve order between time steps. Then during each event we group the curves together, otherwise we separate them.

We thank the anonymous referees for their helpful comments. This research was initiated at the 2nd International Workshop on Drawing Algorithms for Networks in Changing Environments (DANCE 2015) in Langbroek, the Netherlands, supported by the Netherlands Organisation for Scientific Research (NWO) under project no. 639.023.208. IK is supported in part by the NWO under project no. 639.023.208. VP is supported by grant 2014-03476 from the Sweden’s innovation agency VINNOVA.