The Science and Technology Labor Force 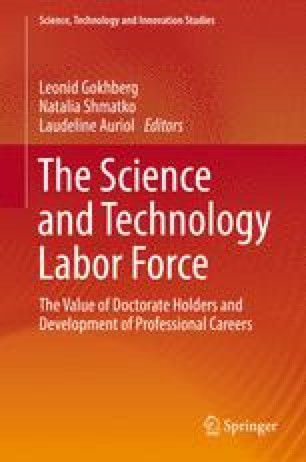 The Science and Technology Labor Force pp 51-74 | Cite as

Doctorate Holders’ Labor Market and Mobility: The Academic Career as the First Choice

Doctoral graduates account for a relatively small proportion of the overall population but their importance is widely recognised (OECD 2010). Having benefitted from highly specialised research training and produced an original contribution to science, doctorate holders are expected to play a key role in the knowledge economy as they stand in a position to drive forward advances in science, technology and knowledge about society. Evidence on the careers of doctorate holders (CDH) and their contribution to science, innovation and the economy is of high relevance not only to policy decision makers and governments who finance the training of this group of individuals and support their integration in the innovation system; but also to prospective employers in search of specific skills for their workforce; and the individuals themselves who consider whether to pursue doctorate studies and proceed with research or unrelated careers. This paper provides an overview of the key statistical and analytical findings that draw on data from the second international CDH data collection conducted in 2010, as well as some complementary sources. Box 1 provides further details on this project.

Labor Market Business Sector Stable Match Annual Earning Temporary Contract
These keywords were added by machine and not by the authors. This process is experimental and the keywords may be updated as the learning algorithm improves.

The opinions expressed in this paper are the sole responsibility of the authors and do not necessarily reflect those of the OECD or those of its member countries’ governments.

The results that are summarised in this paper are the outcome of work carried out within the 2011/12 Program of Work and Budget of the OECD’s Committee for Science and Technological Policy (CSTP), under the aegis of the Working Party of National Experts on Science and Technology Indicators (NESTI) and with sponsorship from the EU’s Seventh Framework Program and NISTEP-Japan. This project has been co-ordinated by Laudeline Auriol and Toshiyuki ‘Max’ Misu with advice from Fernando Galindo-Rueda and under the overall guidance of Alessandra Colecchia, all from the OECD Economic Analysis and Statistics Division. The following individuals, listed in no particular order, have played an active and key role in the project:

Bernard Felix, Eurostat. Contribution to methodological review carried out in 2011.

The project has greatly benefitted from comments from the EU’s project officer, Petter Whitten (DG RTD), national and independent experts and participants at OECD, Eurostat and related workshops in 2011–2012, NESTI meetings held in June 2011 and June 2012 and feedback from the Secretariat and delegates to the OECD Working Party of Research Institutions and Human Resources, in particular Ester Basri (OECD) and Rosa Fernández (BIS, UK). Statistical offices from other participating countries provided access to CDH data and information.