Analysis of Large and Complex Data 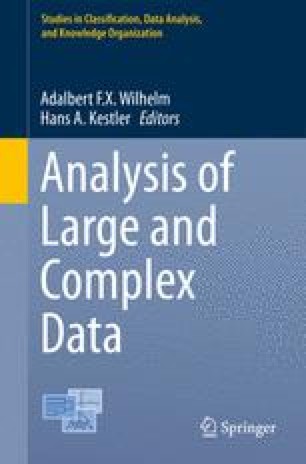 One of the main approaches to tracking causality between income, social inclusion and living conditions is based on regression models estimated using various statistical methods. This approach takes into account quantitative and qualitative information about individuals or households that is collected in different periods of time (years in particular), thus allowing it to be transformed into multidimensional data sets, called panel data. Regression models based on panel data are able to describe the dynamics over time periods, so that the patterns can be related to changes in other characteristics. This paper utilises one of these approaches to panel data analysis RE-EM trees which are used to predict the risk-of-poverty rate of households located in the four “Visegrad” countries. The risk-of-poverty rate of individual households is computed on the basis of cluster analysis results, and it takes into account household living conditions as well as income. Subsequently, the risk-of-poverty rate is used as the outcome for the prediction model above. Certain household characteristics were chosen as predictors including: information about the “head” of the household (age, education level, marital status, etc.) and information about the number of members in the household. The results show slight differences in poverty determinants among Visegrad countries. The determinants with the highest impact on the risk-of-poverty rate are: number of household members (Czech Republic, Hungary and Slovakia) and education level (Poland).

Material Deprivation Household Poverty Poverty Risk Cluster Cluster Household Cluster
These keywords were added by machine and not by the authors. This process is experimental and the keywords may be updated as the learning algorithm improves.
This is a preview of subscription content, log in to check access.

The present paper was supported by VEGA1/0127/11 grant project entitled “The poverty distribution within the EU countries”. EU-SILC microdata were provided for research purposes under EU-SILC/2011/33 agreement concluded between the European Commission, Eurostat and the Technical University in Košice, Slovakia. Eurostat bears no responsibility for the results and conclusions reached by the authors. Data were analysed by Lukáš Sobíšek who cooperates in the project. This work was also supported by projects Mobility—enhancing research, science and education at Matej Bel University, ITMS code: 26110230082, under the Operational Program Education co-financed by the European Social Fund.