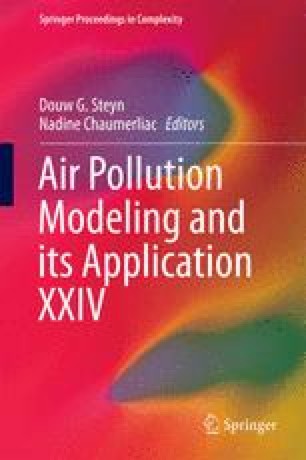 The urban heat island effect, in which air temperatures tend to be higher in urban environments than in rural areas, is known to exacerbate the heat impact on population health. We introduce a new urban climate model, further referred to as UrbClim, designed to study the urban heat island effect at a spatial resolution of a few hundred metres. Despite its simplicity, UrbClim is found to be of the same level of accuracy as more sophisticated models, while also being much faster than high-resolution mesoscale climate models. Because of that, the model is well suited for long time integrations, in particular for applications in urban climate projections. In this contribution, we present temperature maps for London, including an assessment of the present-day climate, and projections for the future (2081–2100).

Urban Heat Island Global Climate Model Urban Climate Urban Heat Island Effect City District
These keywords were added by machine and not by the authors. This process is experimental and the keywords may be updated as the learning algorithm improves.
This is a preview of subscription content, log in to check access.

The research leading to these results has received funding from the European Community’s Seventh Framework Programme under Grant Agreement No. 308497 (Project RAMSES).

Question: How is the bias correction done? How do you ensure it is physically consistent for e.g. temperature and humidity?

Answer: The bias correction between the runs with ERA-Interim data and the runs with GCM-data for the reference period is described in Lauwaet et al. (2015). Hence, we refer the questioner to this article for a detailed description of the procedure and its influence on the data. Since only the temperature results of the GCM-runs are used, the bias correction only deals with the temperatures.

Question: Please describe the model. What are the driving factors of the UHI-effect?

Answer: The model is described in De Ridder et al. (2015). Hence, we refer the questioner to this article full a detailed description. The main driving factor of the UHI-effect during the late afternoon and the evening is the release of heat that has been stored in the buildings and artificial structures in the city.

Question: What effect will changes in the UHI have on air quality?

Answer: There are numerous studies that focussed on the close link between air quality and climate change. Most of these studies, however, do not specifically look at the effects of urban climate. We think that the change in (urban) temperatures has a limited influence on air quality, but also that other elements of urban climate, like a reduced wind speed, have larger influences.