Creativity and Universality in Language 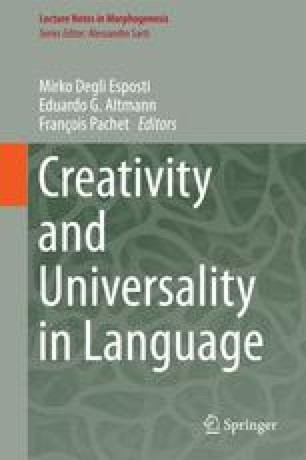 Creativity and Universality in Language pp 59-83 | Cite as

Dynamics on Expanding Spaces: Modeling the Emergence of Novelties

Novelties are part of our daily lives. We constantly adopt new technologies, conceive new ideas, meet new people, and experiment with new situations. Occasionally, we as individual, in a complicated cognitive and sometimes fortuitous process, come up with something that is not only new to us, but to our entire society so that what is a personal novelty can turn into an innovation at a global level. Innovations occur throughout social, biological, and technological systems and, though we perceive them as a very natural ingredient of our human experience, little is known about the processes determining their emergence. Still the statistical occurrence of innovations shows striking regularities that represent a starting point to get a deeper insight in the whole phenomenology. This paper represents a small step in that direction, focusing on reviewing the scientific attempts to effectively model the emergence of the new and its regularities, with an emphasis on more recent contributions: from the plain Simon’s model tracing back to the 1950s, to the newest model of Polya’s urn with triggering of one novelty by another. What seems to be key in the successful modeling schemes proposed so far is the idea of looking at evolution as a path in a complex space, physical, conceptual, biological, and technological, whose structure and topology get continuously reshaped and expanded by the occurrence of the new. Mathematically, it is very interesting to look at the consequences of the interplay between the “actual” and the “possible” and this is the aim of this short review.

The production of written text in a given idiom is a peculiar process. Although texts are generally taken as a paradigmatic example of a collection of tokens (words) that obey both Zipf’s and Heaps’ laws and many modeling efforts have been undertaken to explain this feature, writers very seldom create brand new words in that idiom. Rather, the process of text production is well approximated by the sampling of the existing Zipf’s law of that idiom at the specific time of its writing. Authors, then, choose words according to their frequency and add the necessary short range correlations needed to compose meaningful sentences and long range correlations to follow the plot line.

The generation of the Zipf’s law of words in a given idiom is therefore a different process with respect to book writing and the scientific data analysis and modeling efforts have to be steered toward the comprehension of this global shared law. Notably, some work has been already done based on Google ngrams and it was shown that the Zipf’s distribution of English varies from decade to decade [45] but in a way that its functional form stays constant. The functional form is that of a double slope in logarithmic scale (see Fig. 2d for the Zipf’s law inferred from the Gutenberg corpus) with the Heaps’ law connected to the tail of the distribution, i.e., to the appearance of less frequent words, as it should be. A satisfactory model accounting for the frequency-rank distribution of words in a language has to include different ingredients, therefore, from the mechanism of creation of neologisms, to the aging and disappearance of terms and revival of others. Above all, the mechanism has to highlight the collaborative and shared character of idioms.