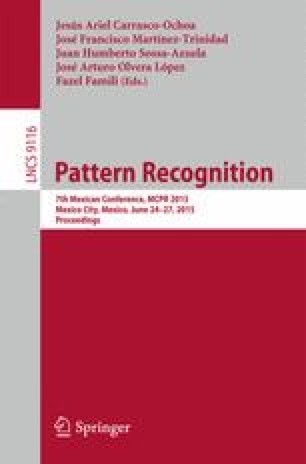 We present Sampled Weighted Min-Hashing (SWMH), a randomized approach to automatically mine topics from large-scale corpora. SWMH generates multiple random partitions of the corpus vocabulary based on term co-occurrence and agglomerates highly overlapping inter-partition cells to produce the mined topics. While other approaches define a topic as a probabilistic distribution over a vocabulary, SWMH topics are ordered subsets of such vocabulary. Interestingly, the topics mined by SWMH underlie themes from the corpus at different levels of granularity. We extensively evaluate the meaningfulness of the mined topics both qualitatively and quantitatively on the NIPS (1.7 K documents), 20 Newsgroups (20 K), Reuters (800 K) and Wikipedia (4 M) corpora. Additionally, we compare the quality of SWMH with Online LDA topics for document representation in classification.

The automatic extraction of topics has become very important in recent years since they provide a meaningful way to organize, browse and represent large-scale collections of documents. Among the most successful approaches to topic discovery are directed topic models such as Latent Dirichlet Allocation (LDA) [1] and Hierarchical Dirichlet Processes (HDP) [15] which are Directed Graphical Models with latent topic variables. More recently, undirected graphical models have been also applied to topic modeling, (e.g., Boltzmann Machines [12, 13] and Neural Autoregressive Distribution Estimators [9]). The topics generated by both directed and undirected models have been shown to underlie the thematic structure of a text corpus. These topics are defined as distributions over terms of a vocabulary and documents in turn as distributions over topics. Traditionally, inference in topic models has not scale well to large corpora, however, more efficient strategies have been proposed to overcome this problem (e.g., Online LDA [8] and stochastic variational inference [10]). Undirected Topic Models can be also trained efficient using approximate strategies such as Contrastive Divergence [7].

In this work, we explore the mining of topics based on term co-occurrence. The underlying intuition is that terms consistently co-occurring in the same documents are likely to belong to the same topic. The resulting topics correspond to ordered subsets of the vocabulary rather than distributions over such a vocabulary. Since finding co-occurring terms is a combinatorial problem that lies in a large search space, we propose Sampled Weighted Min-Hashing (SWMH), an extended version of Sampled Min-Hashing (SMH) [6]. SMH partitions the vocabulary into sets of highly co-occurring terms by applying Min-Hashing [2] to the inverted file entries of the corpus. The basic idea of Min-Hashing is to generate random partitions of the space so that sets with high Jaccard similarity are more likely to lie in the same partition cell.

One limitation of SMH is that the generated random partitions are drawn from uniform distributions. This setting is not ideal for information retrieval applications where weighting have a positive impact on the quality of the retrieved documents [3, 14]. For this reason, we extend SMH by allowing weights in the mining process which effectively extends the uniform distribution to a distribution based on weights. We demonstrate the validity and scalability of the proposed approach by mining topics in the NIPS, 20 Newsgroups, Reuters and Wikipedia corpora which range from small (a thousand of documents) to large scale (millions of documents). Table 1 presents some examples of mined topics and their sizes. Interestingly, SWMH can mine meaningful topics of different levels of granularity.
Table 1.

The remainder of the paper is organized as follows. Section 2 reviews the Min-Hashing scheme for pairwise set similarity search. The proposed approach for topic mining by SWMH is described in Sect. 3. Section 4 reports the experimental evaluation of SWMH as well as a comparison against Online LDA. Finally, Sect. 5 concludes the paper with some discussion and future work.

Min-Hashing has been used in document and image retrieval and classification, where documents and images are represented as bags of words. Recently, it was also successfully applied to retrieving co-occurring terms by hashing the inverted file lists instead of the documents [5, 6]. In particular, Fuentes-Pineda et al. [6] proposed Sampled Min-Hashing (SMH), a simple strategy based on Min-Hashing to discover objects from large-scale image collections. In the following, we briefly describe SMH using the notation of terms, topics and documents, although it can be generalized to any type of dyadic data. The underlying idea of SMH is to mine groups of terms with high Jaccard Co-occurrence Coefficient (JCC), i.e.,
$$\begin{aligned} JCC(T_1, \ldots , T_k) = \frac{\vert T_1 \cap T_2 \cap \cdots \cap T_k \vert }{\vert T_1 \cup T_2 \cup \cdots \cup T_k \vert }, \end{aligned}$$
(3)
where the numerator correspond to the number of documents in which terms \(T_1, \ldots , T_k\) co-occur and the denominator is the number of documents with at least one of the k terms. Thus, Eq. 1 can be extended to multiple co-occurring terms as
$$\begin{aligned} P[h(T_1) = h(T_2) \ldots = h(T_k)] = JCC(T_1, \ldots , T_k). \end{aligned}$$
(4)
From Eqs. 3 and 4, it is clear that the probability that all terms \(T_1, \ldots , T_k\) have the same MinHash value depends on how correlated their occurrences are: the more correlated the higher is the probability of taking the same MinHash value. This implies that terms consistently co-occurring in many documents will have a high probability of taking the same MinHash value.
In the same way as pairwise Min-Hashing, l tuples of r MinHash values are computed to find groups of terms with identical tuple, which become a co-occurring term set. By choosing r and l properly, the probability that a group of k terms has an identical tuple approximates a unit step function such that
$$\begin{aligned} P_{collision}[T_1, \ldots , T_k] \approx {\left\{ \begin{array}{ll} 1 &{} \text{ if } JCC(T_1, \ldots , T_k) \ge s* \\ 0 &{} \text{ if } JCC(T_1, \ldots , T_k) < s* \end{array}\right. }, \end{aligned}$$
Here, the selection of r and l is a trade-off between precision and recall. Given \(s*\) and r, we can determine l by setting \(P_{collision}[T_1, \ldots ,T_k]\) to 0.5, which gives
$$\begin{aligned} l = \frac{\log (0.5)}{\log (1 - s*^r)}. \end{aligned}$$
In SMH, each hash table can be seen as a random partitioning of the vocabulary into disjoint groups of highly co-occurring terms, as illustrated in Fig. 1. Different partitions are generated and groups of discriminative and stable terms belonging to the same topic are expected to lie on overlapping inter-partition cells. Therefore, we cluster co-occurring term sets that share many terms in an agglomerative manner. We measure the proportion of terms shared between two co-occurring term sets \(C_1\) and \(C_2\) by their overlap coefficient, namely
$$\begin{aligned} ovr(C_1, C_2) = \frac{\mid C_1 \cap C_2 \mid }{\min (\mid C_1 \mid , \mid C_2\mid )} \in [0, 1]. \end{aligned}$$
Since a pair of co-occurring term sets with high Jaccard similarity will also have a large overlap coefficient, finding pairs of co-occurring term sets can be speeded up by using Min-Hashing, thus avoiding the overhead of computing the overlap coefficient between all the pairs of co-occurring term sets.

In this section, we evaluate different aspects of the mined topics. First, we present a comparison between the topics mined by SWMH and SMH. Second, we evaluate the scalability of the proposed approach. Third, we use the mined topics to perform document classification. Finally, we compare SWMH topics with Online LDA topics.

All the experiments presented in this work were performed on an Intel(R) Xeon(R) 2.66 GHz workstation with 8 GB of memory and with 8 processors. However, we would like to point out that the current version of the code is not parallelized, so we did not take advantage of the multiple processors.

4.1 Comparison Between SMH and SWMH

For these experiments, we used the NIPS and Reuters corpora and different values of the parameters \(s*\) and r, which define the number of MinHash tables. We set the parameters of similarity (\(s*\)) to 0.15, 0.13 and 0.10 and the tuple size (r) to 3 and 4. These parameters rendered the following table sizes: 205, 315, 693, 1369, 2427, 6931. Figure 2 shows the effect of weighting on the amount of mined topics. First, notice the breaking point on both figures when passing from 1369 to 2427 tables. This effect corresponds to resetting the \(s*\) to .10 when changing r from 3 to 4. Lower values in \(s*\) are more strict and therefore less topics are mined. Figure 2 also shows that the amount of mined topics is significantly reduced by SWMH, since the colliding terms not only need to appear on similar documents but now with similar proportions. The effect of using SWMH is also noticeable in the number of terms that compose a topic. The maximum reduction reached in NIPS was \(73\,\%\) while in Reuters was \(45\,\%\).

In this evaluation we used the mined topics to create a document representation based on the similarity between topics and documents. This representation was used to train an SVM classifier with the class of the document. In particular, we focused on the 20 Newsgroups corpus for this experiment. We used the typical setting of this corpus for document classification (\(60\,\%\) training, \(40\,\%\) testing). Table 2 shows the performance for different variants of topics mined by SWMH and Online LDA topics. The results illustrate that the number of topics is relevant for the task: Online LDA with 400 topics is better than 100 topics. A similar behavior can be noticed for SWMH, however, the parameter r has an effect on the content of the topics and therefore on the performance.

4.4 Comparison Between Mined and Modeled Topics

In this evaluation we compare the quality of the topics mined by SWMH against Online LDA topics for the 20 Newsgroups and Reuters corpora. For this we measure topic coherence, which is defined as
$$ C(t) = \sum \limits _{m=2}^{M} \sum \limits _{l=1}^{m-1} \log \frac{D(v_m, v_l)}{D(v_l)}, $$
where \(D(v_l)\) is the document frequency of the term \(v_l\), and \(D(v_m, v_l)\) is the co-document frequency of the terms \(v_m\) and \(v_l\) [11]. This metric depends on the first M elements of the topics. For our evaluations we fixed M to 10. However, we remark that the comparison is not direct since both the SWMH and Online LDA topics are different in nature: SWMH topics are subsets of the vocabulary with uniform distributions while Online LDA topics are distributions over the complete vocabulary. In addition, Online LDA generates a fixed number of topics which is in the hundreds while SWMH produces thousands of topics. For the comparison we chose the n-best mined topics by ranking them using an ad hoc metric involving the co-occurrence of the first element of the topic. For the purpose of the evaluation we limited the SWMH to the 500 best ranked topics. Figure 4 shows the coherence for each corpus. In general, we can see a difference in the shape and quality of the coherence box plots. However, we notice that SWMH produces a considerable amount of outliers, which calls for further research in the ranking of the mined topics and their relation with the coherence.

In this work we presented a large-scale approach to automatically mine topics in a given corpus based on Sampled Weighted Min-Hashing. The mined topics consist of subsets of highly correlated terms from the vocabulary. The proposed approach is able to mine topics in corpora which go from the thousands of documents (1 min approx.) to the millions of documents (7 h approx.), including topics similar to the ones produced by Online LDA. We found that the mined topics can be used to represent a document for classification. We also showed that the complexity of the proposed approach grows linearly with the amount of documents. Interestingly, some of the topics mined by SWMH are related to the structure of the documents (e.g., in NIPS the words in the first topic correspond to parts of an article) and others to specific groups (e.g., team sports in 20 Newsgroups and Reuters, or the Transformers universe in Wikipedia). These examples suggest that SWMH is able to generate topics at different levels of granularity.

Further work has to be done to make sense of overly specific topics or to filter them out. In this direction, we found that weighting the terms has the effect of discarding several irrelevant topics and producing more compact ones. Another alternative, it is to restrict the vocabulary to the top most frequent terms as done by other approaches. Other interesting future work include exploring other weighting schemes, finding a better representation of documents from the mined topics and parallelizing SWMH.