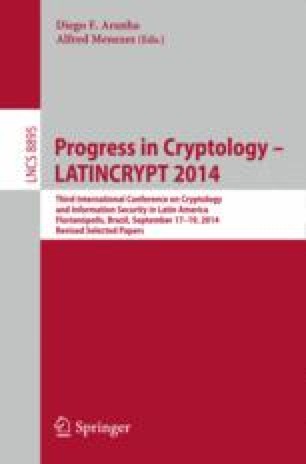 International Conference on Cryptology and Information Security in Latin America

At CT-RSA 2014 Bai and Galbraith proposed a lattice-based signature scheme optimized for short signatures and with a security reduction to hard standard lattice problems. In this work we first refine the security analysis of the original work and propose a new 128-bit secure parameter set chosen for software efficiency. Moreover, we increase the acceptance probability of the signing algorithm through an improved rejection condition on the secret keys. Our software implementation targeting Intel CPUs with AVX/AVX2 and ARM CPUs with NEON vector instructions shows that even though we do not rely on ideal lattices, we are able to achieve high performance. For this we optimize the matrix-vector operations and several other aspects of the scheme and finally compare our work with the state of the art.

We would like to thank Patrick Weiden, Rafael Misoczki, Shi Bai, and Steven Galbraith for useful discussions. We would further like to thank the anonymous reviewers for their suggestions and comments.

An approach for solving LWE that has not been considered in the original work [6] is the decoding attack. It is inspired by the nearest plane algorithm proposed by Babai [4]. For a given lattice basis and a given target vector, it returns a lattice vector that is relatively close to the target vector. Hence, improving the quality of the lattice basis yields a vector that is closer to the target vector. Lindner and Peikert [26] proposed the nearest planes algorithm, a generalization of the former that returns more than one vector and thereby enhances the previous algorithm with a trade-off between its runtime and the probability of returning the actual closest vector within the set of obtained vectors.

Optimizing the trade-offs between the time spent on the attack and its success probability is not trivial, but simulations of the attack show that it is in most cases preferable to run multiple attacks with small success probabilities. This technique is called randomization and was investigated by Liu and Nguyen (see [27]), together with a further improvement called pruning. In comparison to the big improvement achieved with randomization, pruning leads only to a moderate speedup. The maximal speedup achieved in [27] is about \(2^6\), while randomization can reduce the cost by a factor of \(2^{32}\). Since it turned out that the decoding-attack is outperformed by other attacks by far (and pruning is furthermore very hard to analyze), we focused on the randomized version.