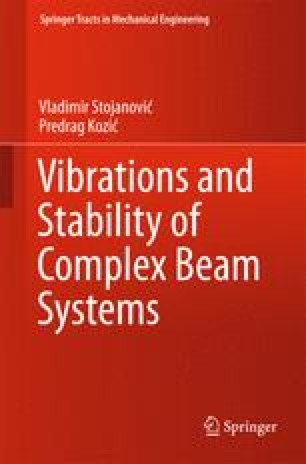 Effects of Axial Compression Forces, Rotary Inertia and Shear on Forced Vibrations of the System of Two Elastically Connected Beams

This chapter covers the solution for forced vibrations of two elastically connected beams of Rayleigh’s, Timoshenko’s and Reddy-Bickford’s type under the influence of axial forces. Scientific contribution is presented through the analytical solutions in forms of three cases of forced vibrations - Harmonic arbitrarily continuous excitation, the continuous uniform harmonic excitation and harmonic concentrated excitation. Analytical solutions were obtained by using the modal analysis method. Based on the results derived in this chapter, it can be made a conclusion that the differences in the approximations of the solutions depending of the used model gave a good solutions just in cases of Timoshenko’s and Reddy-Bickford’s theory for thick beams in higher modes also in forced vibrations regime and must be taken into account.

Axial Force Amplitude Ratio Timoshenko Beam Forced Vibration Rotary Inertia
These keywords were added by machine and not by the authors. This process is experimental and the keywords may be updated as the learning algorithm improves.
This is a preview of subscription content, log in to check access.