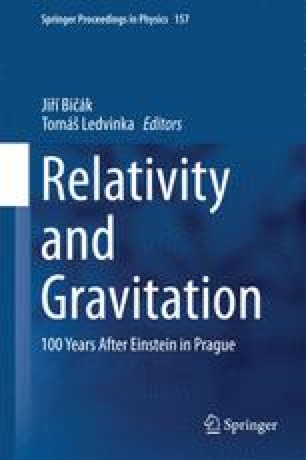 In this contribution we consider the issue of singularity resolution within loop quantum cosmology (LQC) for different homogeneous models. We present results of numerical evolutions of effective equations for both isotropic as well as anisotropic cosmologies, with and without spatial curvature. To address the issue of singularity resolution we examine geometrical and curvature invariants that yield information about the spacetime geometry. We discuss generic behavior found for a variety of initial conditions.

Poisson Bracket Planck Scale Effective Theory Isotropic Model Anisotropic Model
These keywords were added by machine and not by the authors. This process is experimental and the keywords may be updated as the learning algorithm improves.
Download conference paper PDF

In general relativity (GR) the singularity theorems of Hawking, Penrose and Geroch tell us that, under reasonable assumptions, singularities are generic. A spacetime is said to be singular if it is not geodesically complete, which may happen when some geometrical curvature invariants diverge. The expectation is that, by quantizing the gravitational degrees of freedom, namely, with a complete theory unifying gravity and the quantum, the singularities shall be resolved. Loop quantization (as in Loop Quantum Gravity) of the homogeneous, isotropic and flat Friedman-Robertson-Walker (FRW) cosmology coupled to a massless scalar field \(\phi \), can be exactly solved [1]. For that model it was shown that:The fact that the effective theory provides an accurate description of the dynamics at the Planck scale is strongly used to explore the anisotropic models. The effective theory is obtained from the quantum Hamiltonian operator by taking expectation values on appropriately defined states. The thus obtained effective Hamiltonian then generates the dynamics on a classical phase space. The solutions to the effective theory were shown in [2] to accurately describe the evolution of the expectation value of the observables in the quantum theory when they are considered on semiclassical states. Those results were extended to open, closed and flat FRW models with and without cosmological constant (see [3] for a review). Loop quantum cosmology (LQC) has been extended to the simplest anisotropic cosmological models, namely Bianchi I, II and IX [4, 5, 6]. But in none of these cases, the quantum theory has been solved, even numerically. Then, in order to study these models at semiclassical level, one generally assumes that the effective theory reproduces the solutions to the quantum theory when semiclassical states are considered. This is our working hypothesis, which is well justified by the results in the isotropic cases. It would be interesting to know whether the evolution of the semiclassical states reproduces the solutions which we get from the effective theory. From this point of view, the study of the effective theory can be seen as the first step in this direction.

The new issues to consider in the anisotropic models are: is the bounce generic? We now have anisotropy/Weyl curvature, how does it behave near the singularity/bounce? Can we have different kind of bounce, say, dominated by shear \(\sigma \)? Are the geometric scalars absolutely bounded? The goal of this contribution is to answer these questions using the effective theory for Bianchi I which has anisotropies, Bianchi II that has anisotropies and spatial curvature and Bianchi IX which has all the features of Bianchi I, II and is furthermore, spatially compact. Even more, the Bianchi IX model has a non trivial classical limit, in the sense that, Bianchi IX is chaotic in the classical theory and behaves like Bianchi I with Bianchi II transitions as one approaches the singularity.

Bianchi I and II

Now we will compare the results of the effective theories for the isotropic FRW \(k=0\) and \(k=1\), diagonal Bianchi I, II and IX. All of them with a matter content a massless scalar field satisfying the Klein-Gordon equation. A good starting point to compare the results is to answer the questions that we asked in the introduction, later we will mention other important results:

One of the main issues that a quantum theory of gravity is expected to address is that of singularity resolution. Loop quantum cosmology has provided a complete description in the case of isotropic cosmological models and singularity resolution has been shown to be generic. A pressing question is whether these results can be generalized to anisotropic models. In this case we lack a complete quantum theory, but one can rely on the existence of an effective description, capturing the main (loop) quantum geometric features. In this contribution we have described the main features of such effective solutions. Singularities seem to be generically resolved as the time evolution of geometrical scalars is well behaved past the would be classical singularity. With the study of these anisotropic models, a question that still arises is whether this behavior is generic for non-homogeneous configurations. That is, are we a step forward toward generic quantum singularity resolution?