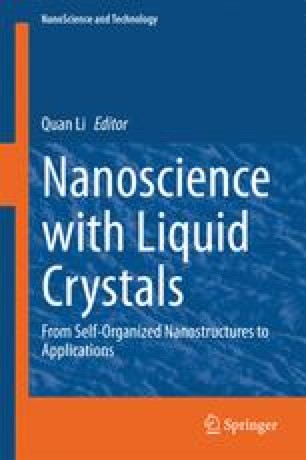 Chapter
Part of the NanoScience and Technology book series (NANO)

Recent progress in the chemistry of ion-based liquid crystals and related materials based on anion-responsive π-conjugated molecules is summarized. Thermotropic liquid crystals with highly ordered positively and negatively charged species are promising materials as organic semiconductors that show fascinating properties compared to those of electronically neutral species. The achievement of ion-based liquid crystals requires the preparation of appropriate charged building subunits, in particular, planar anionic species, which can be obtained by the complexation of electronically neutral anion-responsive π-conjugated molecules. The author’s group has fabricated a variety of ion-based organized structures as liquid crystals comprising pyrrole-based anion receptor molecules. The charge-carrier transporting properties exhibited by some of the obtained materials highlight their potential utility in future applications.

Liquid Crystal Columnar Structure Polarize Optical Microscopy Anionic Component Anion Receptor
These keywords were added by machine and not by the authors. This process is experimental and the keywords may be updated as the learning algorithm improves.
This is a preview of subscription content, log in to check access.

The contributions reported herein have been supported by PRESTO, Japan Science and Technology Agency (JST) (“Structure Control and Function”, 2007–2011), Grants-in-Aid for Young Scientists (B) (No. 21750155) and (A) (No. 23685032) and Scientific Research in a Priority Area “Super-Hierarchical Structures” (No. 18039038, 19022036) from the Ministry of Education, Culture, Sports, Science, and Technology (MEXT), the matching fund subsidies for private universities from the MEXT, 2003--2008 and 2009--2014, and the Ritsumeikan Global Innovation Research Organization (R-GIRO) project, 2008--2013. The author thanks all the authors and the collaborators described in the acknowledgement in the previous publications, in particular, Prof. Atsuhiro Osuka and his group members for single-crystal X-ray analysis, Dr. Takashi Nakanishi, NIMS, for his kind help with various analyses of molecular assemblies, Prof. Shu Seki, Osaka University, and his group members for electrical conductivity measurements, Prof. Hitoshi Tamiaki, Ritsumeikan University, for various measurements, and all the group members, especially, Dr. Yohei Haketa and Dr. Bin Dong, for their contributions on ion-based materials.