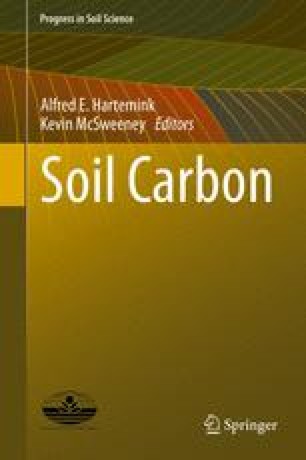 The concentration of Soil Organic Carbon (SOC) is often used as an indicator of soil condition and soil health. To be useful as an indicator, SOC must be considered in context, with soil type, climatic region, local rainfall, slope, and land use history influencing measured amounts of SOC. The concept of Percent Projected Natural Vegetation Soil Carbon (PNVSC) implicitly incorporates these context variables. Percent PNVSC is defined as a simple percentage comparing the contemporary measured soil carbon against a hypothetical amount of soil carbon that would be observed in the local landscape today, if the areas under managed agroecosystems remained under natural vegetation (which in this study is dry sclerophyll forest). The term ‘natural’ used in the PNVSC concept approximates with the natural system prior to agrarian settlement. Percent PNVSC was calculated for a 22,000 ha sub-catchment of the Hunter Valley, Australia and it showed a spatially weighted average of 73, indicating substantial soil carbon loss as a result of cumulative land use change over more than 100 years. The Percent PNVSC map highlights changes in soil carbon distribution across the landscape with mid-slope positions lower in the catchment showing the greatest loss of soil carbon. Viticulture has resulted in half of the original SOC being lost, compared to a 75 % PNVSC for unimproved pasture and an 83 % PNVSC for improved pasture. Average soil carbon loss due to mixed land-use change in this sub-catchment is 13,331 kg C/ha.