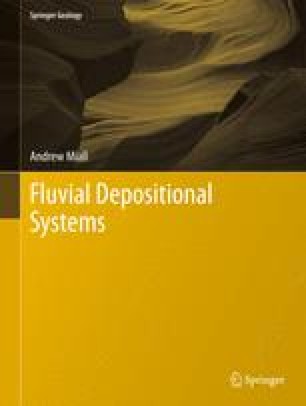 Sequence stratigraphy was developed initially for shallow-marine deposits (Vail et al. 1977), but was extended to the interpretation of coastal fluvial deposits in the models of Posamentier and Vail (1988) and Posamentier et al. (1988). These models included a number of controversial features regarding the response of fluvial systems to base-level change that were discussed at length by Miall (1991, 1996); a discussion not repeated here. Two models developed specifically for fluvial systems were proposed in the early 1990s, those of Wright and Marriott (1993) and Shanley and McCabe (1994), referred to hereafter as the WMSM models.

Sequence Boundary Fluvial System Transgressive System Tract Incised Valley Ancient Record
These keywords were added by machine and not by the authors. This process is experimental and the keywords may be updated as the learning algorithm improves.
This is a preview of subscription content, log in to check access.