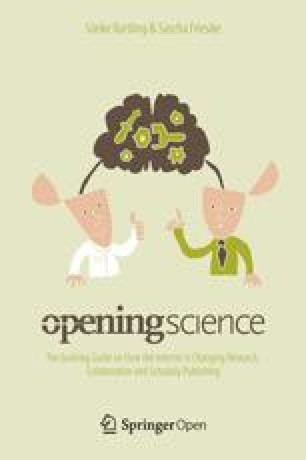 Open Science and the Three Cultures: Expanding Open Science to all Domains of Knowledge Creation

The Open Science movement has been most successful in transforming disciplines traditionally associated with science. Social science and humanities disciplines, especially those in the United States, are less well represented. To include all domains of knowledge, the Open Science movement must bridge these ‘three cultures’ through projects that highlight multiple lines of inquiry, research methods, and publishing practices. The movement should also consider changing its moniker to Open Knowledge in order to include academic disciplines that do not self-identify as science.

Open Science Movement Social Science Scholars Current Publication Practices Open Access Principles Inspirational Passages
These keywords were added by machine and not by the authors. This process is experimental and the keywords may be updated as the learning algorithm improves.

How knowledge circulates has always been vital to the life of the mind, which all of us share, just as it is vital, ultimately, to the well-being of humanity.

In 1959, C. P. Snow’s lecture, ‘The Two Cultures,’ argued that the sciences and the humanities were divided and at odds: “Literary intellectuals at one pole—at the other scientists, and as the most representative, the physical scientists. Between the two a gulf of mutual comprehension—sometimes (particularly among the young) hostility and dislike, but most of all lack of understanding” (p. 4). These divisions are felt perhaps most poignantly in American universities. Several cultural, economic, and historical events have led to increased divisions between not only the sciences and the humanities, but also the social sciences. Within each of these ‘three cultures’ (a term coined in Kagan’s 2009 book of the same name), sub-disciplinary divides persist as well, creating pockets, or ‘silos’ of knowledge communities with their own methods, languages, professional organizations, identities, and so on.

These divisions have roots in the rise of American universities at the turn of the twentieth century. At that time, the liberal arts tradition of a shared curriculum was replaced in many schools by German educational philosophies that emphasized Lernfreiheit, freedom in learning. Lernfreiheit models encouraged students to choose their own courses and majors and prompted faculty to pursue specialized research; these changes eventually led to a model of higher education that replaced generalist courses and professors with individualist disciplinary departments (Hart 1874). Several national legislative acts were also passed during and after this philosophical change, and these moves privileged the sciences, writ large, over the humanities and fine arts while more or less neglecting the social sciences. First, the Morrill Act of 1862 established institutions of higher learning in service to the rising economic needs in industry and agriculture. Accordingly, these universities emphasized science-related disciplines over those in the social sciences and humanities.1 Next, the mid-twentieth century saw the establishment of government agencies that fund science research, and the amount they make available to scientists far outweighs that of funding for the humanities and fine arts.2 Add these historical factors to the rather abysmal job prospects for most humanities and social science majors in the present day, and one can easily understand how disciplinary divisions persist in American universities. Indeed, some scholars like Kagan argue that the privileging of the sciences “created status differentials that eroded collegiality and provoked defensive strategies by the two less advantaged cultures” (2009, p. ix).

Proponents of Open Science must understand these cultural divides as we move forward into a new era of knowledge, discovery, and collaboration. Nielsen (2012) and others3 have noted that the immediate challenge for the Open Science movement is its ability to change the culture of science itself, which continues to operate within a print-based, proprietary, and closed framework for scientific discovery and communication. But a larger challenge looms on the horizon: if the Open Science movement hopes to advance change among all areas of knowledge and discovery, it must overtly articulate a larger mission, one that acknowledges the potential impact of networked technologies on all fields of knowledge. Perhaps this mission is tacitly assumed, but it cannot be so, especially when the movement has adopted the moniker, Open Science. At best, humanities and social science scholars, especially those in the U.S., will assume that this movement does not apply to them because ‘science’ is a term generally reserved for disciplines that employ the scientific method. Such a designation does not include most areas of the humanities and social sciences. At worst, non-science scholars will perceive Open Science as a threat, another way in which scientific disciplines dictate methods for knowledge production and maneuver for more resources.

This challenge is not insurmountable, but it will involve intensive collaboration and understanding among scientists, social scientists, and humanists. Most immediately, we should examine the term ‘Open Science.’ Scholars of language, rhetoric, and writing (like myself) are keenly aware of the power of words and their associations, and the word ‘science’ carries associations of division and inequality for some humanities and social science scholars.

Either the movement will have to create and foster a broader definition of ‘science’ or it will have to replace the term altogether. To use the moniker effectively, the Open Science movement will have to acknowledge and address disciplinary divisions and monetary reward systems that led to this acrimony. A first step might be a broader exploration of the potential impact that networked technologies will have on different knowledge areas. Knowledge discovery and communication practices vary among different disciplines, but no thorough taxonomy of these differences currently exists within the Open Science community. Figure 1 offers just a few examples of the differences between current publishing practices in the sciences and the humanities (although the social sciences are not included here, a similar comparison could be made between the sciences and social sciences). The figure makes clear that the scientific communication is already utilizing digital channels of communication much more deliberately and completely than the humanities. Moreover, digital technologies and Open Access principles (like those employed in Open Science initiatives) have so far achieved minimal impact on publications in the humanities. Such comparisons will be necessary to inventory the status of publishing and research in various disciplines, and then to devise ways new technologies might enhance research and communication across all fields of knowledge.

Another strategy that would alleviate the potential conflict with the moniker ‘Open Science’ is to substitute it with the phrase ‘Open Knowledge.’ This broader, more inclusive alternative is already employed by at least one organization, the Open Knowledge Foundation (OKF)4; their vision statement includes comprehensive, inspirational passages that foreground a desire to be as inclusive as possible: “We promote the creation, dissemination and use of open knowledge in all its forms, from genes to geodata and from sonnets to statistics. Our projects, groups and tools work with this principle in different and varying ways to increase user access and ensure transparency.” OKF includes investigative examples from the social sciences and humanities (‘sonnets and statistics’), emphasizing that their mission includes all forms of knowledge. Compare this to the description of the Science Online Conference, a major organizing body for Open Science advocates in the U.S.: “ScienceOnline 5 is a non-profit organization … that facilitates conversations, community, and collaborations at the intersection of Science and the Web.” Few humanities and social science scholars in the U.S. would read this description and assume that their attendance at the conference would be appropriate, or that the issues discussed at the conference have much impact on their own disciplines.

Perhaps the most pragmatic strategy for bridging the ‘three cultures’ is to develop projects that adapt the digital tools of Open Science for research projects in the humanities and social sciences. OKF is a leader in this regard as well: they are pursuing initiatives such as the Shakespeare Project, a website that aims to provide multiple annotated editions of Shakespeare’s plays. The Shakespeare Project leverages open source annotation tools, crowdsourcing, and literary works in the public domain to create a free, open, interactive, and ongoing space of knowledge production and access. These same principles are at the heart of perhaps the most extensive and exciting U.S. program that uses methods similar to Open Science in the humanities, the Office of Digital Humanities (ODH). ODH is a set-aside program within the National Endowment for the Humanities (NEH), and its express purpose is to enhance humanities research through technology. More specifically, ODH has been aggressively pursuing ways to promote digital methods of preserving, archiving, and accessing scholarly materials. One of its initiatives is a series of institutes around the country that train humanities researchers in the methods and tools of digital analysis, data curation, and text coding. Like OKF, ODH recognizes that humanities scholars have a different set of publishing priorities and technological expertise than that of scientists, so it leverages the most immediately applicable and effective tools to promote digital research in a community that has traditionally understood knowledge production as a print-based, textual enterprise.

While a similar claim can be made about a traditionalist culture in the sciences—and indeed, it has been made most emphatically by Nielsen (2012)—the degree to which the humanities and social sciences are engaged with technology is exponentially smaller. Moreover, the humanities and social sciences have a qualitatively different perspective—a different culture, to use Kagan’s (2009) term—that requires investigation, interpretation, and engagement by Open Science advocates in order to expand this project more fully into other domains of knowledge.

This chapter is distributed under the terms of the Creative Commons Attribution Noncommercial License, which permits any noncommercial use, distribution, and reproduction in any medium, provided the original author(s) and source are credited.

Open Access This Chapter is distributed under the terms of the Creative Commons Attribution Noncommercial License, which permits any noncommercial use, distribution, and reproduction in any medium, provided the original author(s) and source are credited.