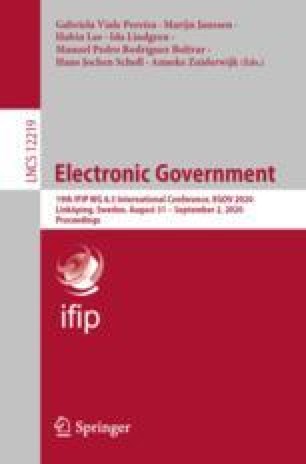 The Role of Domain-Skills in Bureaucratic Service Encounters

Citizens are increasingly expected and even required to go online for much of their interaction with government, making the skills citizens bring to these encounters particularly important. Several skillsets for the use of online resources have been proposed in the general e-government literature. However, few empirical studies explore the experiences and strategies of citizens themselves related to the role of skills in their interaction with government. Consequently, there is a gap in the knowledge regarding which skills are specifically relevant when dealing with government online. To explore this gap, this paper presents a qualitative analysis of interviews with citizens in Danish municipal service centres. The analysis takes its departure in a review of the literature that addresses aspects of skills relevant for the (digital) citizen-government encounter. The paper contributes to the e-government literature, by introducing the concept of domain-skills as a central skill set for citizen self-service. Domain-skills constitute a scaffolding citizens can build on, when looking for and interpreting information and contextualizing it to their situation, making it easier for them to act on their own, with confidence.

Appendix 1: Profile of Sites and Participants

The demographical profiles of the municipalities serve to show how typical they are for the Danish context in general, as well as to outline any specific issues that may affect the contact patterns of the authorities involved – specifically: a high unemployment rate, many young or elderly people, many with low education levels.

Demographical profile of the municipalities where fieldwork was conducted

a Data from Denmark’s Statistic 2012

A1.2 Demographical Profile of Participants

All age groups are represented in the data, some more than others. Figure 1 shows the differences between the age-profile of the participants (whose age was registered) across all sites and the age profile of the general Danish population2.

The age of the participants reflects the age of the Danish population [48] a deviation of 6% or less or all age groups, except for the age-group 20–24 which has a 10% overrepresentation and the age-group 65–69 with a 9% overrepresentation. This was to be expected as younger citizens and citizens around the age of retirement typically have more frequent interactions with authorities are more often in situations they have not been in before, which tends to lead to a greater need for face-to-face interaction [42] The level of education also represents the Danish population with a deviation of less than 5% except for those with only a high-school education.

Figure 2 shows the education profile of all participants of 20 years or over compared to the total Danish population (also 20+).

For the variation of the perspectives represented in the study, this data would imply that we may lack perspectives from well-educated citizens, who may have different experiences with and find different meanings in digitisation and centralisation than citizens with less education. At the same time, this group of citizens could arguably be expected to have an easier time compensating for lack of domain-skills and thus less need of contextualization and framing.

Participants use of the internet, of home banking and their experience with doing tax online (representing a “service” all adults need to interact with at least once a year) – deviated 5% or less from that of the general population [48] (Fig. 3).