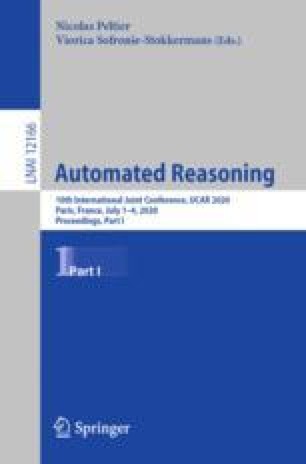 Efficient Automated Reasoning About Sets and Multisets with Cardinality Constraints

When reasoning about container data structures that can hold duplicate elements, multisets are the obvious choice for representing the data structure abstractly. However, the decidability and complexity of constraints on multisets has been much less studied and understood than for constraints on sets. In this presentation, we outline an efficient decision procedure for reasoning about multisets with cardinality constraints. We describe how to translate, in linear time, multisets constraints to constraints in an extension of quantifier-free linear integer arithmetic, which we call LIA*. LIA* extends linear integer arithmetic with unbounded sums over values satisfying a given linear arithmetic formula. We show how to reduce a LIA* formula to an equisatisfiable linear integer arithmetic formula. However, this approach requires an explicit computation of semilinear sets and in practice it scales poorly even on simple benchmarks. We then describe a recent more efficient approach for checking satisfiability of LIA*. The approach is based on the use of under- and over-approximations of LIA* formulas. This way we avoid the space overhead and explicitly computing semilinear sets. Finally, we report on our prototype tool which can efficiently reason about sets and multisets formulas with cardinality constraints.

Similarly, when reasoning about container data structures that can hold duplicate elements, multisets are the obvious choice of an abstraction. Multisets are collections of objects where an element can occur several times. They can be seen as “sets with counting”. Although multisets are interesting mathematical objects that can be widely used in verification, there was no efficient reasoner for multisets and sets with cardinality constraints until recently [6]. Moreover, for a long time it was not known if the logic of multisets with cardinality constraints is even decidable [7]. Nevertheless, researchers have recognized the importance of this logic and they have been studied multisets in combination with other theories.

Lugiez studied multiset constraints in the context of a more general result on multitree automata [7] and proved the decidability of multiset formulas with a weaker form of cardinality operator that counts only distinct elements in a multiset.

In this paper we revive the first decision procedure for multisets with cardinality constraints [9, 10]. We represent multisets (bags) with their characteristic functions. A multiset m is a function \(\mathbb {E}\rightarrow \mathbb {N}\), where \(\mathbb {E}\) is the universe used for populating multisets and \(\mathbb {N}\) is the set of non-negative integers. The value m(e) is the multiplicity (the number of occurrences) of an element e in a multiset m. We assume that the domain \(\mathbb {E}\) is fixed and finite but of an unknown size. We consider the logic of multisets constraints with the cardinality operator (MAPA), given in Fig. 1. An atom in MAPA is either a multiset comparison, or it is a standard quantifier-free linear integer arithmetic atom, or it is a quantified formula (\(\forall e. \mathsf {F}^\textsf {in}\)), or it is a collecting sum formula. We allow only universal quantification over all elements of \(\mathbb {E}\). This way we can express, for example, that for a multiset k it holds \(\forall e. k(e)=0 \vee k(e)=1\) – in other words, k is a set. A collecting sum atom is used to group several formulas involving sums into a single atom. This is needed for the next step of the decision procedure. The sums are used in the definition of the cardinality operator:
$$|m| = \sum \limits _{e \in \mathbb {E}} m(e)$$

To check a satisfiability of a \(\mathrm {LIA}^\star \) formula, we use the semilinear set characterization of solutions of integer linear arithmetic formulas.

Ginsburg and Spanier showed (Theorem 1.3 in [3]) that a solution set for every Presburger arithmetic formula is a semilinear set, and we use that result to eliminate the star operator.

By applying Theorem 1, checking satisfiability of a \(\mathrm {LIA}^\star \) formula reduces to reasoning about linear integer arithmetic. Note, however, that this approach results in automatically constructing a formula might be really large, depending on the size of a semilinear set. In addition, this approach relies on computing semilinear sets explicitly, both of which make it scale poorly even on simple benchmarks.

The described decision procedure is sound and complete. However, its crucial component is a computation of semilinear sets. While it is possible to compute Hilbert basis using the z3 [2] SMT solver, to the best of our knowledge there are no efficient tools for computing semilinear sets. Moreover, Pottier [12] showed that a semilinear set might contain an exponential number of vectors. To overcome the explicit computation of semilinear sets, Piskac and Kuncak [10] developed a new decision procedure for \(\mathrm {LIA}^\star \) which eliminates the star operator from the atom \(\varvec{x_1} \in \{ \varvec{x_2} \mid F\}^\star \) by showing that \(\varvec{x_1}\) is a linear combination of \(\mathcal {O} (n^2 \log n)\) solution vectors of F, where n is the size of the input formula. Although this new decision procedure avoids computing semilinear sets, it instantly produces a very large formula that could not be solved in practice by existing tools, not even for the most simple benchmarks.

However, if the given \(\mathrm {LIA}^\star \) formula is unsatisfiable, this approach will result in an equally large formula as in [10], and again it does not scale. Therefore, in parallel to finding an under-approximation of the set \(\{ \varvec{x_2} \mid F_2 ( \varvec{x_2})\}^\star \), we are also constructing a sequence of its over-approximation. The properties, that such an overapproximation should have, are encoded as a set of Constraint Horn Clauses and we use existing solvers to compute them. Such an overapproximation, if exists, is an interpolant that separates two conjuncts in the given \(\mathrm {LIA}^\star \) formula, proving this way that the formula is unsatisfiable.

Finally, we have implemented the presented decision procedure and the tool is publicly available at https://github.com/mlevatich/sls-reachability. Because there were no MAPA benchmarks available, we had to create our own benchmarks. In addition, we also treated 240 BAPA benchmarks about sets, available in [1], as MAPA benchmarks. While the full report on the empirical results is available in [6], our general assessment is that the presented algorithm is effective on both SAT and UNSAT benchmarks. Our tool solved 83% of benchmarks in less than 50 seconds, and over 75% of those in under 3 seconds. We believe that this tool is the first efficient reasoner for multisets and sets with cardinality constraints.

The presented work describes a sequence of decision procedures that has lead towards an efficient reasoner for multisets and sets with cardinality constraints. We noticed that some constraints arising in formal verification of protocols and data structures could have been expressed more succinctly and naturally, were they using multisets as the underlying abstract datatype in the specification. Nevertheless, due to the lack of tool support they use sets, resulting in more complex constraints. While there was an older tool for reasoning about multisets with cardinality constraints [11], that tool served mainly as a proof of concept and was evaluated only on a handful of manually written formulas. We here presented a recent tool for reasoning about sets and multisets and we showed empirically that this tool scales well and can easily reason about complex multiset formulas. We hope that this work will lead to a renewed research interest in multisets and encourage their use in software analysis and verification.

This presentation is based on the previously published results on reasoning about multisets with cardinality constraints [6, 9, 10, 11]. We sincerely thank the collaborators on these projects: Nikolaj Bjørner, Maxwell Levatich, Viktor Kunčak and Sharon Shoham, without whom this work would not be possible.