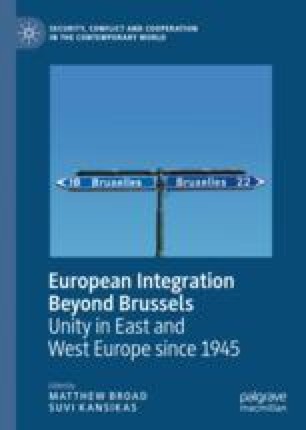 Recasting the History and Politics of European Integration ‘Beyond Brussels’

Chapter
Part of the Security, Conflict and Cooperation in the Contemporary World book series (SCCCW)

Europe is a continent whose history has, in one form or another, long been dominated by integration. In the post-1945 period especially, a host of institutions and schemes soon sprung up designed to bring together European states in a bid to serve a multitude of economic, political, cultural and technical needs. It is perhaps a little surprising, then, that the majority of writing on European integration since the start of this century has focused almost exclusively on the evolution of one particular, and until recently geographically quite narrow organisation: the European Union (EU). Against this backdrop, this chapter proposes new ways of looking beyond the EU and investigating in depth some of the various European structures which developed before, in parallel to and after it. It draws a distinction between pan-European, regional institutions and subregional activities, as well as institutions in an East-West and pre- and post-Cold War context. This exposes the huge variety of institutions that have littered the landscape and have in various ways contributed to European unity, and reinforces the need to look below, at and above the level of the EU and its historical antecedents.