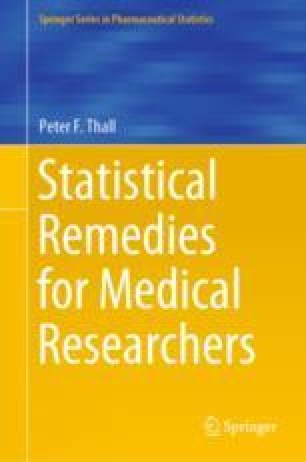 Knocking Down the Straw Man

An introduction to clinical trials is given, including a list of things to consider when designing a clinical trial. An extensive discussion is given of the Simon (1989) two-stage phase II clinical trial design, because it is used very commonly, and it very often is misunderstood or applied inappropriately. This design provides a useful illustration of more general problems with the way that the frequentist paradigm of testing hypotheses is misused or misinterpreted, and problems that may arise when making inferences based on single-arm trials. These include (1) treatment-trial confounding, (2) making biased treatment comparisons, (3) the common misunderstanding of what an alternative hypothesis means, (4) how rejection of a null hypothesis often is misinterpreted, (5) consequences of ignoring toxicity in phase II trials, (6) assuming incorrectly that a null response probability estimated from historical data is known with certainty, and (7) logistical problems that may arise when making interim adaptive decisions during a trial. Two alternative Bayesian methods will be described. The first is posterior evaluation of binomial data from a phase II trial based on a binary response variable, leading to a conclusion that is substantively different from that based on a test of hypotheses. The second is a practical Bayesian phase II design that monitors both response rate for futility and toxicity rate for safety.

Everybody Else Is Doing It, So Why Can’t We?

Title of The Cranberries’ first album