Mergers in the Global Markets 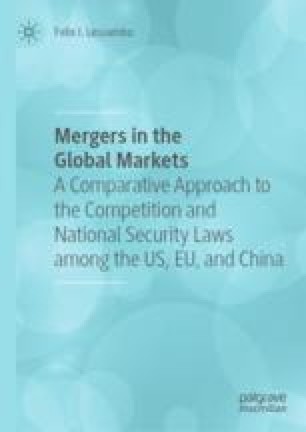 Extraterritorial Competence of the United States, the EU, and China Competition Laws

The external outreach of both the Sherman Act and the Clayton Act took quite some time to become part of the U.S. doctrine. The two U.S. antitrust provisions that most frequently give rise to extraterritorial jurisdiction are Sections 1 and 2 of the Sherman Act. Section 1 declares illegal “every contract, combination … or conspiracy,” in restraint of trade or commerce among the several states, or with foreign nations, while Section 2 makes it a felony for any person to “monopolize … or combine or conspire…, to monopolize any part of the trade or commerce among the several states, or with foreign nations.” The United States is not alone. The European Union Merger Regulation, which came into force in 1990 and was revised in 2004, gives the European Commission the authority to review any concentration, which is deemed to have a “Community” (in other words, an EU) dimension. Last but not least, Article 2, China’s AML is applicable to monopolistic conducts outside the territory of the People’s Republic of China, which serve to eliminate or restrict competition on the domestic market of China.

Cite this chapter as:
Lessambo F.I. (2020) Extraterritorial Competence of the United States, the EU, and China Competition Laws. In: Mergers in the Global Markets. Palgrave Macmillan, Cham