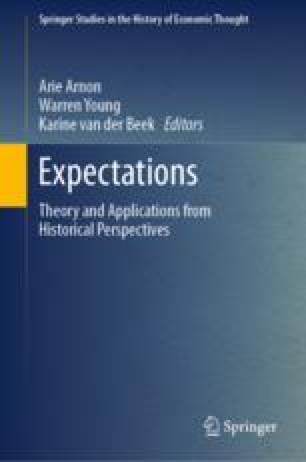 The Permanent-Transitory Confusion: Implications for Tests of Market Efficiency and for Expected Inflation During Turbulent and Tranquil Times

Even when all past and present information is known, individuals usually remain uncertain about the permanence of observed variables. After reviewing the history and role of adaptive expectations and its statistical foundations in modeling this permanent-transitory confusion, the paper investigates the consequences of this confusion for tests of market efficiency in the treasury bill and foreign exchange markets. A central result is that the detection of serial correlation in efficiency tests based on finite samples does not necessarily imply that markets are inefficient. The second part of the paper utilizes data on Israeli inflation expectations from the capital market to estimate the implicit speed of learning about changes in inflation and to examine the performance of adaptive expectations in tracking the evolution of those expectations during the 1985 shock stabilization as well as during the stable inflation targeting period.

Personal note on the history of the paper by Alex Cukierman

The origin of this paper goes back to an old unpublished manuscript by Cukierman and Meltzer (1982). A couple of years before that time Karl Brunner and Allan Meltzer became aware of the importance of the permanent-transitory confusion. I first discovered the universality of this confusion for the formation of expectations and for economic behavior when, as a visiting scholar at Carnegie-Mellon during the end of the seventies and beginning of the eighties, I started to interact with Allan and Karl on this topic. This interaction culminated in a number of joint published papers. The Cukierman and Meltzer (1982) paper was a later spinoff of this research effort and was never completed mainly because the research attention of both Allan and myself had turned to other topics and I had returned to Tel-Aviv.

But I always felt that the ideas in our unpublished manuscript are sufficiently important to justify bringing it up to date and amplifying its message with empirical work. This is particularly important for younger generations of economists who, due to the early criticism by the rational expectation school that adaptive expectations are not rational, might not be aware of the fact that Muth (1960) provided a statistical foundation for the permanent-transitory confusion in which adaptive expectations are rational.

When the organizers of the conference on “Expectations: Theory and applications in historical perspectives” suggested I write a paper for the conference I felt the time had come to do that. Unfortunately, on May 8, 2017, my long-time friend and collaborator Allan Meltzer passed away.

My young collaborator, Thomas Lustenberger, joined me in this effort. The current updated and expanded version of the paper integrates the analysis in the original manuscript with some newer empirical work. Beyond the personal loss I feel along with Allan’s family, the history of the paper is one illustration of the process through which the research torch is being passed across generations of economists. I view it as a personal token of appreciation to Allan Meltzer who had a major influence on my professional life.

This research project was conducted while Thomas Lustenberger was affiliated with the Swiss National Bank and the University of Basel.

We benefited from useful discussions on tests of market efficiency in the foreign exchange market with Menzie Chinn. The views expressed in this paper are those of the author(s) and do not necessarily reflect those of the SNB.

It is convenient to first prove the following Lemma

By Lemma 1, the numerator of this expression is zero. Since the denominator is positive Eut+1ut = 0. QED

The proof is an immediate consequence of Lemma 1. QED

Cite this chapter as:
Cukierman A., Lustenberger T., Meltzer A. (2020) The Permanent-Transitory Confusion: Implications for Tests of Market Efficiency and for Expected Inflation During Turbulent and Tranquil Times. In: Arnon A., Young W., van der Beek K. (eds) Expectations. Springer Studies in the History of Economic Thought. Springer, Cham