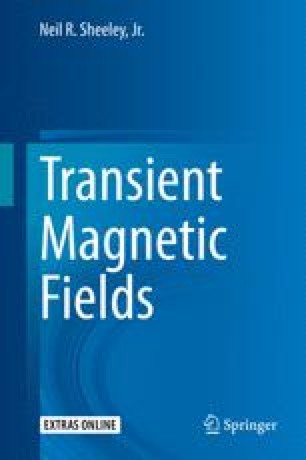 In the previous chapter, we described the magnetic field that occurs when an electric current is increased linearly with time or decreased linearly with time during a finite interval Δr. For this purpose, we regarded the linear on-ramp as a sequence of infinitesimal steps, each of whose individual contributions consists of an outgoing “bubble” of closed loops followed by a correspondingly infinitesimal static dipole field, as described in Chap.  3. In the region of overlap, the bubbles interfered destructively, leaving a growing dipole field produced by the accumulation of the infinitesimal dipole contributions. But at the two ends of the wave train, the leading part of one bubble did not overlap with the trailing part of another bubble, so that a region of positive meridional flux was produced at the front of the wave train and a region of negative meridional flux was produced at the end. The result was a growing dipole field bounded by 2R-wide sheaths of oppositely directed meridional field at each end. In this chapter, we extend the analysis to current ramps that are not linear, but are curved at one or both ends.