Federalism and National Diversity in the 21st Century 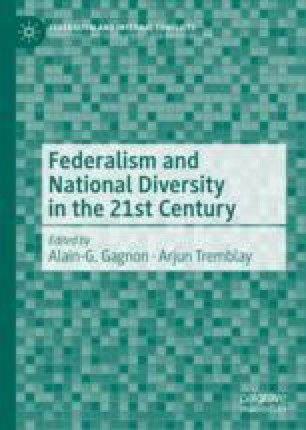 ‘Nested Newness’ and the Quality of Self-Government: The Case of the Hong Kong Special Administrative Region

This chapter employs an analytical framework based on Mackay’s concept of ‘nested newness’ and, drawn from feminist institutional theories, to assess the quality of self-government in the Hong Kong Special Administrative Region. The framework is used to examine the emergence and outcomes to date of the post-1997 quasi-federal autonomy arrangement for Hong Kong, where many residents claim a distinctive collective identity and values vis-à-vis the wider People’s Republic of China. The chapter argues that the Hong Kong autonomy arrangement underscores the need for analyses of multinational accommodation that go beyond political institutions and policies and state architectures, to also assess how these are shaped by their nestedness in contexts, histories, and relations.

As I write from Hong Kong several months after submitting the present chapter, pan-democratic candidates have just swept the territory’s District Council elections, held November 24, 2019. The turnout of 71.2 per cent of registered voters was a historic record for any Hong Kong election. The District Councils are the territory’s only almost fully directly elected bodies. However, they are advisory and mainly deal with local matters like garbage collection and bus stop locations. Going into the polls, they were largely controlled by relatively well-resourced, pro-establishment politicians benefitting from the local organizing of pro-Beijing groups. Nevertheless, as nested newness reminds us, timing matters. The elections occurred when nearly six months of anti-government demonstrations triggered by the now formally withdrawn extradition bill had been in a particularly disruptive and violent phase. The economy was officially in recession. Protester demands had expanded to include a demonstrator amnesty, withdrawal of the designation of some protests as riots, an independent inquiry into alleged police brutality and misconduct, and democratization. Voters, including some who thought the protesters had gone too far, widely repudiated the government.

Police-protester clashes intensified in mid-November after a protester’s death, but also due to mounting anger over the government’s failure to provide a political way forward. Instead, the government relied on police, apparently authorized to use what many residents regarded as disproportionate violence against protesters. Demonstrators blocked access to some university campuses, major roads and public transport. Daily life was seriously disrupted for days. Schools were closed; as universities became major front lines, post-secondary classes were also cancelled. One campus saw a pitched battle between police and protesters; another experienced a days-long standoff and the violent clashes spilled into nearby neighbourhoods. As I write, a few dozen protesters are still inside that campus, surrounded by a police cordon and concerned residents. Many protesters have been seriously injured, as have some police, journalists, politicians, and residents (one of whom died). The authorities have increasingly denied permission for legal demonstrations. Consequently, the District Council polls became a referendum on the government’s handling of the crisis. With pan-democrats reported to have won just under 60 per cent of the popular vote and 347 of 452 seats, they have effectively wrested control of 17 of 18 of the local bodies from establishment and pro-Beijing politicians.

The day after the election, Chief Executive Lam said in a statement that the ‘SAR government will humbly listen to the public and reflect thoroughly’ (Cheng 2019a). PRC officials did not directly address the pan-democratic landslide, reiterating that halting violence and restoring stability remained priorities and that Hong Kong was still an SAR within the PRC (SCMP Staff 2019). At this crucial point in the evolution of Hong Kong’s autonomy arrangement, the nested newness analytical framework points to three key contextual, temporal, and structural factors shaping events and, ultimately, the quality of self-government possible.

First, the evolving global political economy in which the autonomy arrangement is embedded—characterized by the PRC’s growing economic and political power in Hong Kong and beyond—has continued to influence government responses to protester demands. Local and international business associations and elites widely and publicly criticized the extradition bill, a key factor in its eventual withdrawal. However, the business-government alliance institutionalized in the autonomy arrangement has not openly fractured. As the protests went on, the territory’s powerful business tycoons largely backed the government’s hardline, no concessions strategy.

Some business-related actors were more willing than others to push back publicly, despite the reliance of so many on PRC money, directly or indirectly. In recent weeks, some office workers in the central financial district held almost daily lunch-hour anti-government demonstrations in support of protesters. Back in July, the American Chamber of Commerce in Hong Kong called on the HKSAR government to end the violence and promote reconciliation. Underscoring the importance of Hong Kong’s liberal institutions to capitalism, it said that a survey of its members found concern that the protests could permanently damage the territory’s reputation as an international business hub characterized by the free flow of information and rule of law (Tsang 2019). The HKSAR government continued to reject protester demands for an independent inquiry into police conduct. However, the American Chamber said its members supported ‘[s]etting up an internationally credible independent inquiry into all aspects of recent unrest over the bill, a move that will demonstrate fairness and justice under the rule of law’ (American Chamber of Commerce in Hong Kong 2019).

A legacy of the context in which the autonomy arrangement arose, two sets of norms are still evidently in tension in the territory’s ‘one country, two systems’: the norms of traditional territorial state sovereignty that legitimate PRC state- and nation-building and the liberal norms that instead internationalize Hong Kong’s status, and that are desired by many residents and valued by many businesses. Accordingly, the PRC government has declared to be illegal foreign interference the US Hong Kong Human Rights and Democracy Act passed by Congress in recent days. Effectively an expansion of the 1992 United States–Hong Kong Policy Act that permits the US to treat post-1997 Hong Kong separately from the rest of the PRC for trade and economic controls purposes, the new Act provides for sanctions against individuals or entities considered to have violated freedoms guaranteed in Hong Kong by the Basic Law.

Time, and the interacting new and old, have been the second dimension of nested newness of particular relevance at this juncture in the evolution of Hong Kong’s autonomy arrangement. The protests have brought to the fore new and newly empowered actors, namely the police and the demonstrators, many of the latter school- and university-aged individuals. To be clear: these actors are empowered, but not symmetrically. The police, who used more powerful weapons and tactics as the protest continued, recently changed their motto from ‘We Serve with Pride and Care’ to ‘Serving Hong Kong with Honour, Duty and Loyalty’ (Cheng 2019b). Wearing professional grade protective clothing, often full anti-riot gear, they have deployed tear gas, pepper spray, water cannon, rubber bullets, and sometimes live ammunition; there have also been reports of semi-automatic weapons and machine guns stored at the front lines. Meanwhile, protesters, typically armed with masks, umbrellas, and other makeshift garb, have sometimes wielded bricks, petrol bombs, and metal poles, and occasionally arrows and corrosive acid (Leung 2019). Protester-police interactions with each other have weakened the HKSAR government’s legitimacy and power; they have pushed into greater prominence the District Councils. There, large numbers of new voters have helped to elect significant numbers of new, younger-generation pan-democratic politicians. Moreover, despite their restricted formal policy role, these pan-democratic District Councils will affect the political balance in upcoming higher-level elections: District Councils select 117 of the 1,200 Election Committee members who choose the Chief Executive; electors choose five District Councillors as legislators. All of these new and newly empowered actors could have longer-term consequences for more established actors in Hong Kong’s autonomy arrangement.

However, the local election alone will not resolve the political and socioeconomic exclusion that helped propel people into the streets. What began as massive, peaceful demonstrations against the extradition bill over time widened into a struggle for meaningful autonomy for Hong Kong, the protection of residents’ rights and freedoms as well as democratization. In the last weeks, protesters have been as little inclined to accept concessions as has been the governments.

The triple transition that characterizes Hong Kong’s autonomy process still makes democratization a risky proposition for the PRC government. The protests have further underscored how weakly integrated into the rest of the PRC many Hong Kong residents are and want to be, even though those advocating for independence remain a minority. Through the protests, the central government has continued to prioritize the strengthening of state- and nation-building in the territory, especially through stronger national patriotic education and more aggressive national security laws. When, just days before the election, local judges ruled unconstitutional a HKSAR emergency regulation banning protesters from wearing masks, a central government official stated that only the NPC Standing Committee had the authority to interpret the Basic Law, failing to mention the scope that Hong Kong courts have under the Basic Law Art. 158 to make such interpretations on their own when adjudicating cases involving Basic Law provisions within the limits of the HKSAR’s autonomy.

Yet, so far the Standing Committee has left the Hong Kong courts to adjudicate as the HKSAR government attempts to defend the anti-mask regulation. Protesters and police did not clash on polling day. Voters were given their say. Demonstrators and police remained relatively restrained the next day amid reports that protesters still at one campus were in some cases refusing to eat. The calling of an independent inquiry into police conduct and other government concessions could contribute to de-escalation and to building political conditions more conducive to political dialogue on democratization, socioeconomic exclusion, and the protection of the territory’s distinct identity and institutions. Meanwhile, the wider contextual, temporal, structural, and processual nestedness of Hong Kong’s autonomy arrangement will continue to constrain its evolution and the quality of self-government it provides.

Cite this chapter as:
Henders S.J. (2020) ‘Nested Newness’ and the Quality of Self-Government: The Case of the Hong Kong Special Administrative Region. In: Gagnon AG., Tremblay A. (eds) Federalism and National Diversity in the 21st Century. Federalism and Internal Conflicts. Palgrave Macmillan, Cham