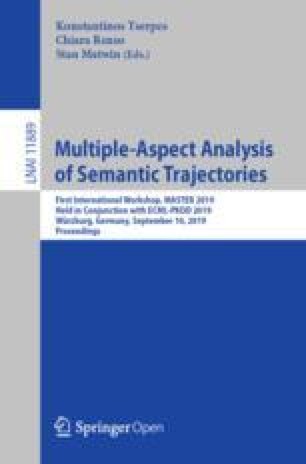 Learning from Our Movements – The Mobility Data Analytics Era

From the pioneering works on spatiotemporal databases back in ‘90s to the era of Big Mobility Data Analytics nowadays, in this paper we try to follow the thread of research objectives and initiatives in the field. Initially, we provide a flashback to the 25 past years (though from a personal, hence, biased point of view). Then, we discuss in brief the challenges related to mobility data processing, management, analytics, and visualization to be addressed in modern applications tracking populations of moving objects in real time.

Once upon a time, it was the ChoroChronos EU research project. The challenge at that time (‘90s) was to bring spatial and temporal database aspects together in a, then emerging, integrated spatio-termporal domain. As time was passing, new challenges appeared and addressed by the researchers of the field: efficient system architectures, knowledge discovery from mobility data, privacy aspects, etc. Nowadays, in the era of Data Science and Big Data, mobility data analytics aims at learning from objects’ movements, covering a range of methods and solutions, from de-noising of location information and integrating with multiple heterogeneous related sources to predictive analytics, offline and online. Figure 1 illustrates a timeline of related research projects covering the period from mid ‘90s until today1.

2 Flashback to the Past

Let’s catch the thread from the beginning\(\ldots \) Back in ‘90s, research in spatial and temporal databases, separately, resulted in pretty mature results to contribute in real-world DBMSs. In the spatial database field, Oracle introduced Spatial Data Option in 1996, OGC released its first specifications in 1997, and PostGIS was launched in 2001. On the other hand, TSQL2 language specification was developed in 1993. The “marriage” of the two fields was led by research projects in both US and Europe; focusing on the latter, the notable ChoroChronos EU project (1996–2000) aimed at bringing together the two communities and integrate their ideas in the so-called spatio-temporal databases, where time would be considered a first-class citizen [2, 4, 5].

What followed was the focus of research in point objects due to the popularity of related applications (tracking of moving objects via GPS technology), which led to the “moving object trajectory” concept2 and, as expected, raised challenges on knowledge discovery from this new type of data as well as on personal data privacy. This brought the “dialogue” with other than database management domains, including machine learning/data mining and data privacy and security. For instance, the GeoPKDD (2005–2009), MODAP (2009–2012) and MOVE (2009–2013) EU projects aimed at devising knowledge discovery and (privacy-preserving) analysis methods for trajectories of moving objects, bringing together ICT researchers and domain specialists [3, 8]. The advances in social networks and linked open data in ‘00s also resulted in the so-called location-based social networking and relevant applications. Thus, a new trajectory variation was born, the semantic trajectories [6], studied by e.g. the SEEK EU project (2012–2015), the objective of which was to envisage a new semantic enriched knowledge discovery process where the semantic aspect (in the sense of the meaning of the movement) would be embedded in each step.

Nowadays, one can find plenty of sensor data and open sources of related information, mature Big Data technologies, plethora of Data Science methods and tools. In this environment, a hot research topic is that of Mobility Data Analytics (MDA). The range of processes covered under this term includes data acquisition and processing (typically from multiple and varying data sources), data management (storage and indexing, as usually\(\ldots \)), data mining, data privacy, data visualization and user interaction [7].
A typical MDA application tracks in real-time a population of humans / vehicles / vessels / aircrafts and handles the resulted trajectories, enriched with heterogeneous context, in order, for instance, to be able to assess traffic situation or drivers’ behavior, forecast anticipated movements in short-term or schedule traffic in long-term, react as soon as an “anomaly” is detected, and so on [9]. In this framework, challenges touch almost each architectural layer of an MDA system, compatible with the EU BDVA reference model (illustrated in Fig. 2):

This is, more or less, the context of a number of recent EU projects, including datAcron (http://datacron-project.eu; 2016–2018), where the use cases are on maritime and aviation, Track & Know (https://trackandknowproject.eu; 2018–2020) on drivers in urban environment, and MASTER (http://www.master-project-h2020.eu; 2018–2022) on land transportation, sea monitoring, and tourism.

Fortunately, research is an everlasting story. So, what’s next? In the near future, we expect to see advances, for instance, in self-organizing and self-cleansing information integration tools (do we know what information is relevant to enrich a location or assess its accuracy better than a crawler searching the Semantic Web?), close to storage-less architectures following the IoT paradigm (if data resides in its original source, what is the need to replicate it in our storage? what if data is unaffordable huge and only meta-data as well as patterns are stored locally?), and Explainable AI (why this and not that technique in order to analyze location data? our right to explanation). We expect these and other even more exciting research outcomes to appear in the years to come.