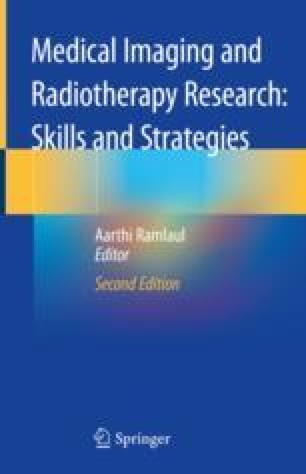 In this chapter the different types of data that you may come across in quantitative research are explored. How data might be first described using various descriptive statistics is addressed before looking at which statistical tool is most appropriate to use and why. The distribution of data, particularly normal distribution curve that helps in the choice of both descriptive statistics and the inferential statistical test is discussed. The two forms of hypotheses, alternate and null, are introduced as well as probability levels and means of establishing whether the data are normally distributed or not. Statistical package for social sciences (SPSS) printouts of some of the more commonly used tests described in the chapter are included to show how to interpret data in order to come to the correct conclusion regarding reporting of the findings.

The test below relates to emotional intelligence scores of radiography students, referred to in the printout as test scores.

The independent samples t-test printout consists of two tables. The first table describes the data. In this case the dependent variable was called test score. The next two columns contain the names of the two groups being compared and the number of subjects in each group. The mean score is then seen. In this case we can see that the diagnostic radiographers had a higher test score (36.91) than therapeutic radiographers (32.29). We then can see the standard deviation and standard error of the mean (SEM), which is the standard deviation divided by the square root of the sample size (SEM = σ/√n). This table tells us the difference between the groups, but not whether this difference is significant. For that we need to look at the second table.

The difference between the two groups is 4.627. This can also be calculated by subtracting the means in the group statistics table.

When using SPSS it is possible to test more than one assumption at a time; the table below contains two analyses. The analyses are all part of one data set and are looking at the diagnostic and therapeutic scores for a mental rotations test looking at comparing the 3 years of students. The first table as with the t-test looks at homogeneity of variance and as the significance values are above 0.05 we can assume equal variance. The ANOVA is quite robust to deviations from homogeneity of variance but it is an assumption of the test. Descriptive of the variables is not done automatically with this test as with the t-test but can be toggled on if required.
The second table is the ANOVA analysis. The important columns are the final two, which give us the test statistic for each test and the significance value. The first test looking at the 3 diagnostic years was not significant (F = 0.349, p = 0.707). The second test looking at therapeutic students is significant (F = 6.014, p = 0.004). What we do not know at the moment is what year group is different from which other year group. The test simply states that there is a difference, it could be that all year groups are different from each other or just 1 year might be different from another, any variation is possible and the more groups you have, the bigger the possible number of possibilities.
In order to find out where the difference is we have to undertake a post hoc test. As there was no significant difference between the diagnostic student year groups, just the therapeutic students we only need to do a post hoc test for the therapeutic students. There are a variety of post hoc tests that can be done and in this instance a Tukey’s HSD (honestly significant difference) test was used. In the table below I have highlighted the significant differences. The table repeats itself, but we can see that the first year’s score was significantly different to the second year’s score (p = 0.016), but not the third year’s score (p = 0.833). The second year’s score was also different to the third year score (p = 0.007).

∗The mean difference is significant at the 0.05 level

The SPSS printout for non-parametric tests is far simpler than for parametric tests. The table below is the printout for the same data as the ANOVA test. Again, two tests were performed and each row reports one test. The first column tells you what is being tested. The second column what statistical test was performed and then the significance level of the test. The final column tells you whether or not to reject the null hypothesis.

Double clicking on this box brings up further information seen below. First, we see a bar chart that shows us the frequency of the test scores for each of the two groups. Second, we see a further box that tells us the test statistic for the test we carried out. In this case U = 414.5, p < 0.001.

The printout for the Kruskal–Wallis test is very similar to the Mann–Whitney test above consisting of the same columns. As with the ANOVA test in this case two tests were performed and each row reports one test. The first column tells you what is being tested. The second column what statistical test was performed and then the significance level of the test. The final column tells you whether to reject the null hypothesis.

Again, double clicking the box in SPSS brings up a pop-out with more information. The pop-out shown below shows you each year’s score for the therapeutic students in the form of a box and whisker plot. The second box gives you the test statistic and repeats the significance level of the test. We can now report the finding of the test, H = 9.321, p = 0.009.

When doing a correlation it is very useful to view the result in the form of a scatterplot. This will show the relationship between the two variables. It is not usual to put a line of best fit on as this is technically a regression line and implies that you have done a regression.

Regression analysis is widely used for prediction and is used to infer a causal relationship between the independent and dependent variables. In the above example it might be possible to suggest that if we change the average sentence length of a document, we can change its readability score. If we undertake a regression analysis on the above data the first column tells us the correlation coefficient followed by the coefficient of determination (r2 value). The r2 value tells us that approximately 28% of the variance in readability score can be explained by the sentence length.

The ANOVA table informs us whether our regression model explains a statistically significant proportion of the variance. The F-ratio in the ANOVA table (see below) tests whether the regression model is a good fit for the data. Remember we could add more variables to the model and build up a picture of what affects readability score. The table shows that the independent variable (sentence length) is statistically significant when predicting the dependent variable (Readability score), F = 32.035, p < 0.0001.

The coefficients table informs us about the values of the regression line. The column marked B tells us where the line intercepts the axis (11.312) and the slope of the line (0.229), the model predicts an increase of 0.229 in readability score for every increase of 1 word in sentence length. The graph following the coefficients table shows this data and also has the data from the above table present in the form of a formula. The zero intercept is not shown on the graph but let us put some figures into the formula. The intercept is 11.3 and if we want to know the value for a sentence length of 12 the formula becomes 11.3 + (0.23 × 12) = 14.07, which looking at the graph seems to be about right. The final column is the significance value for the regression coefficient.