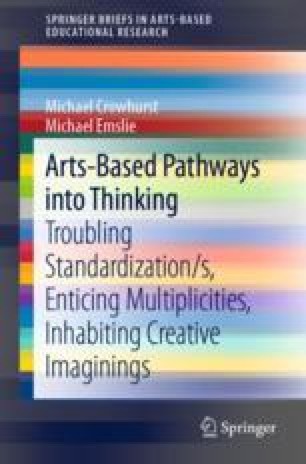 The Problem: Standardizations and Normativities

In this chapter we describe the phenomenon that has provoked our investigations. We identify this problem as tendencies towards standardizations, normativities and alignments, and we use the neoliberal university as a case study. We argue that such standardizations and alignments are the antithesis of what might characterize a pro-diversity or expansive environment. We argue that we are witnessing an intensification of these tendencies in universities and that these limiting tendencies are amplifying. This section concludes with a reflection on the type of flow that charaterizes standardized environments. We describe and deploy what we name a critical/collective/auto/ethnographic method to explore this terrain.

Interlude: How Are We/You Produced in Standardized and Normative Ways?

Universities have been taken over by the walking dead. Not scholars. Not teachers. Not researchers. Not writers. ‘Managers’ run meetings, confirm minutes, asterisk items, organize catering for away days, impose Key Performance Indicators, facilitate retreats, write vision statements and configure milestones. Welcome to the zombie university…

Brabazon (2016, p. 14) pleads for intervention into the zombie university:

If we do not, then these zombie deans and vice chancellors will form a zombie horde of management in higher education. They will swarm and kill us. Perhaps they already have.

How do standardized normative ways produce their other?

Conrad’s (2013) novel, ‘Heart of Darkness’ like all great works of literature, is a layered text that is open to a wide variety of readings and meanings. It has also inspired many other works of art (Memory: The Origins of Alien 2019). ‘Apocalypse Now’ is an adaptation of Conrad’s novel. This movie uses the novel as a springboard to explore the theme of the costs of moving through and into problematic spaces. The key cost being a loss of self. A mad rocking mumbling Marlon awaiting all who make such a journey.

The further I/we travelled into the centre of the university, and I/we had travelled some way up the river, the more I/we saw that disturbed and angered me/us. The more I/we noticed that many of the compromises justified on the basis that these were about moving towards somewhere better eventually, were actually about individual’s positioning themselves as compliant in order to benefit from this compliance.

The further in I/we went the more I/we had to say. The further in I/we went the more reasons there were not to bite my/our tongue. The more often I/we spoke out the more problematic I/we perceived I/we came to be seen as. The longer this went on the more marginal to the centre I/we felt myself/ourselves becoming. After a time I/we came to realize that this repeated performance of marginality had produced an effect. And the effect that had been produced I/we would recognize as a deeper dimension of marginality. I/we realized at some point that my/our desire to participate on some of the committees that ran the part of the neoliberal university I/we was a part of had dissipated. The university could offer me/us an all expenses paid study tour of Paris and I’d/we’d turn my/our nose up at it. This neoliberal culture was one that I/we didn’t want to belong to. I/we came to be alienated. I/we came to understand what this meant. I/we had no passion for or interest in what was on offer. I/we had seen too much. The further in I/we went the further out and on an edge I/we desired to be.

We realized that alienation was not a monolithic or totalizing subject position. We realized that even though we knew that we were no longer interested in ‘x’ that this did not preclude intense interest in ‘y’. We began to make decisions about moving into healthier spaces. We began to notice that we started to occupy spaces that were consistent with our interests, and ways of being and working that we valued.

We noticed that even though we were still getting paid by the university that we no longer felt any connection to it and that we were effectively now being paid by that university to teach (which we wanted to do), to construct courses, to work with colleagues we admired, and to publish. Effectively we ended up more or less where we wanted to be.

Had I washed my hands of trying to move into the centre? Had we turned our backs on the centre? What about responsibility to make change? What about the bigger picture? I/we had remained active on one committee. I/we still fought the good fight in one space. All chant—Mother Theresa Mother Theresa—An idea emerged—Occupy complex multiple spaces

Returning to ‘Heart of Darkness’ offers a way for us to explain what we mean here. In ‘Heart of Darkness’ (Conrad 1899) Kurtz begins his journey into Africa on a boat moored on the river Thames. He sets sail and travels deep into Africa. At the beginning of the novel Kurtz travels from the ‘civilized’ West into an ‘uncivilized’ Africa. Through the novel this distinction—the distinction between the civilized and the uncivilized—is called into question.

As I/we recall aspects of industrial London are drawn in sharp relief, a relief that is facilitated or generated via Kurtz’s encounter with Africa. Kurtz occupies a space where he begins to question the basis on which he drew a distinction between the 2 spaces. The edge and the centre of the neoliberal university—can be understood in a similar way. The valorized edge, the space that is expansive, non-compliant, ethical, altruistic, not strategically aligned, on the one hand and the problematic centre, the space that is centrist, self-interested, parasitic, careerist, unethical, cynically compliant and standarized on the other.

Is it fair to characterize the centre as the soul-less bad guy and the edge as the Mother Therese of the university? There are clearly examples where those in positions of power have been able to use their influence for good. And there are also examples where the edge has shown itself not to be as pure and as ethical as it might be perceived to be. It could also be argued that those on the edge are dependent on and benefit from the compromises that are made by those in the middle to ensure that the university continues to function and receive government funding. However, even in light of these complexities we maintain our position that standardizations are problematic and on occasion unethical but we acknowledge that we cannot have an edge without these standardizations and make the case for the edge at the same time we acknowledge that the standardized centre is not always a problem and the edge is not somewhere utopian.