Continuous Semigroups of Holomorphic Self-maps of the Unit Disc 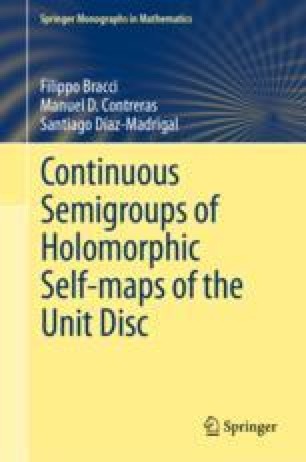 In this chapter, we study the behavior at the boundary of semigroups from a dynamical point of view. Given a semigroup \((\phi _t)\) in \(\mathbb {D}\) and a point \(z\in \mathbb {D}\), one can follow the “backward” trajectory up to a boundary point. The union of the backward trajectory and the forward trajectory of z is a maximal invariant curve for the semigroup. In case the backward trajectory is defined for all negative times, it is called a backward orbit. In the first section we study such backward orbits and prove that every repelling fixed point admits a special regular backward orbit landing at such a point. Using this special backward orbits, we construct pre-models at repelling fixed points. Next, we examine the backward invariant set of \((\phi _t)\), namely, the set of points which admit a maximal invariant curve defined for all negative times. We prove that this set is formed by petals, which are the images of pre-models, and “isolated” backward orbits. We show that the boundary of a petal is locally connected (and, in fact, except a very special case, a Jordan curve), always contains the Denjoy-Wolff point and can contain at most another fixed point of the semigroup which has to be repelling. Next, using these tools, we characterize petals and repelling fixed points via the geometry of the image of the Koenigs function. This allows also to completely describe the analytic behavior of the Koenigs function at boundary fixed points.