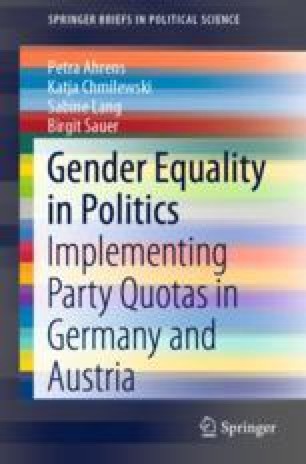 Conclusion: The Long Road to Parity in Politics

The concluding chapter summarizes the main findings by way of two levels of comparison: (1) between countries on the national level, and (2) between and within countries on subnational levels. We put these comparisons in the context of current debates on electoral system changes as well as more ‘radical’ propositions in both countries to switch from voluntary party quotas to legislative or constitutional quotas. As the chapter revisits discussions of how to increase the compatibility of quotas and electoral choice, it illustrates how initiatives around ‘parity laws’ gained momentum. We conclude by emphasizing that incremental changes to voluntary party quotas from within parties are unlikely to be sufficient to reach gender parity in representation.