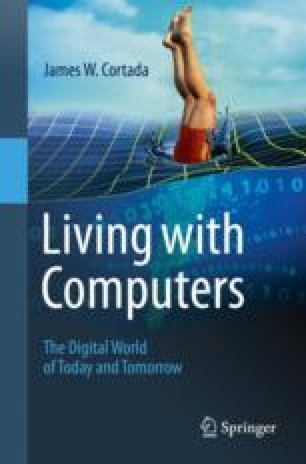 Living with Computers pp 1-4 | Cite as

Seventy-five years ago answering this question was easy. A Hungarian mathematician named John von Neumann laid it out in a short report in the mid-1940s that said essentially a computer had three parts: input, which is data and instructions collected and sent to a processor, second, that part of the machine that did something with the input, such as adding or subtracting numbers, and third, output, the act of pushing the results to a printer, punch cards or later onto magnetic tape and even later to magnetic storage. His ideas became known as the Von Neumann Architecture and a half century later, it was still essentially the big picture description of a computer: three parts, which could consist of a bunch of specialized machines, such as one to punch holes into stiff cards, the computer itself (processor, later server), and all manner of output devices, connected together with electrical wires and cables, and all managed by software much like traffic signals or police directing the flow of vehicles through a community.

Cite this chapter as:
Cortada J.W. (2020) What Is Computing?. In: Living with Computers. Copernicus, Cham