Minorities and Populism – Critical Perspectives from South Asia and Europe 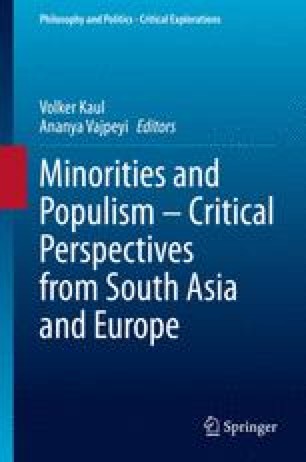 On How to Deal with Populism

We can distinguish between three approaches on how to deal with populism: exclusion and isolation; conscious ignorance; and instrumentalization. Jan-Werner Müller’s analysis of populism points in the direction of the first approach, which is generally adopted by liberals. Social democrats, on the other hand, prefer to ignore populism and rather focus on key social issues. Last but not least, the radical left sees in a certain form of populism a powerful instrument for realizing social claims. The aim of this paper is to review the different approaches to populism and to point out their limitations and weaknesses. Whereas left-wing populism risks to be no less nationalistic than right-wing populism, liberalism and social democracy may not address people’s true concerns that bolster the populists’ ranks. Liberalism does not recognize that people might have needs other than reasons and social democracy has a too-reduced concept of needs that does not take into account questions of identity.

Cite this chapter as:
Kaul V. (2020) On How to Deal with Populism. In: Kaul V., Vajpeyi A. (eds) Minorities and Populism – Critical Perspectives from South Asia and Europe. Philosophy and Politics - Critical Explorations, vol 10. Springer, Cham