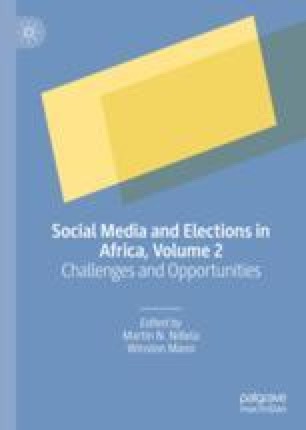 Social Media and Elections in Africa, Volume 2 pp 1-7 | Cite as

Protests against misrule are becoming more and more visible in the digital age in Africa. Consider the civil disobedience in Sudan that culminated in the 11 April 2019 Sudanese coup d’état that deposed President Omar al-Bashir after 30 years in power or the energetic youth-driven street protests in Algeria demanding substantive reforms even after forcing the resignation of long-serving President Abdelaziz Bouteflika in April 2019. Similarly, in the Democratic Republic of the Congo President Kabila was forced not to stand for re-election after fierce protests against his continued hold on power after his term had expired in 2016. The constitution barred him from running for a third term. In Cameroon protesters have become more visible against poor performance of the government of Paul Biya, who at 86 is one of the oldest rulers in the world. In Egypt and Uganda, protests are common in spite of the heavy-handed response of the authorities. In most cases the military hold on to power or are willing to sacrifice political leaders to retain power. The book starts by mentioning these prominent cases of protests, which we argue have become more visible due to social media. In these cases, new digital tools are an important part of the political changes.