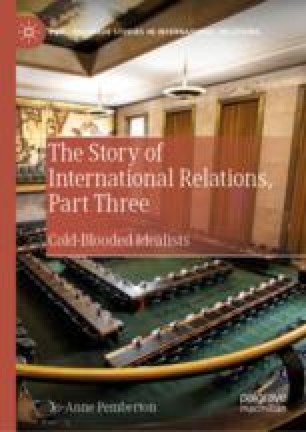 The Story of International Relations, Part Three pp 239-349 | Cite as

Conferences at Prague and Bergen and the Looming War

The 1938 session of the ISC took place in Prague in May against the background of Czechoslovakia’s partial mobilisation. No Italian or Austrian delegation was present: Italy had quit the LON and the Anschluss entailed the liquidation of the conference’s Austrian unit. It was the last ISC session attended by a German representative. Discussion largely concerned the teaching of international relations. In this context, the study of collective psychology was urged: the study of the powerful currents of thought driving events. The 1939 session took place in late August in Bergen under the heading of Economic Policies in Relation to World Peace. The consensus was that future international economic policy must be oriented towards social needs no less than commercial relations and that for the latter to flourish effective coercive mechanisms are needed in order to guarantee against pillage and conquest. In late November, a meeting of the Institute of Pacific Relations (IPR) opened at Virginia Beach, Virginia. It focussed on the impact of the European war on Asian international relations, notably on the capacity of Free China to maintain its resistance against Japan and on Japanese policy in respect to the holdings of European powers in Southeast Asia.