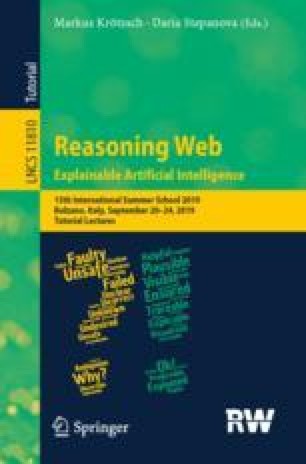 Classical Algorithms for Reasoning and Explanation in Description Logics

Description Logics (DLs) are a family of languages designed to represent conceptual knowledge in a formal way as a set of ontological axioms. DLs provide a formal foundation of the ontology language OWL, which is a W3C standardized language to represent information in Web applications. The main computational problem in DLs is finding relevant consequences of the information stored in ontologies, e.g., to answer user queries. Unlike related techniques based on keyword search or machine learning, the notion of a consequence is well-defined using a formal logic-based semantics. This course provides an in-depth description and analysis of the main reasoning and explanation methods for ontologies: tableau procedures and axiom pinpointing algorithms.

For the convenience of interested readers, in this appendix we recap some background material used in this course, such as the basic notions for describing the (theoretical) complexity of algorithms, and the propositional satisfiability problem.

A decision problem (for an input set X) is simply a mapping \(P :X \rightarrow \{\textit{yes}, \textit{no}\}\). Note that X can be an arbitrary set of objects. For example, for the concept subsumption problem, X consists of all possible pairs \(\langle {\mathcal {O},C\sqsubseteq D}\rangle \) where the first component is an ontology \(\mathcal {O}\) and the second component is a concept subsumption \(C\sqsubseteq D\). An algorithm A solves (or decides) a decision problem P for X, if A accepts each value \(x\in X\) as input, terminates for all these values, and returns the (correct) result \(A(x)=P(x)\).

A common way to solve a problem is to reduce it to another problem, for which a solution is known. A decision problem \(P_1 :X \rightarrow \{\textit{yes}, \textit{no}\}\) is (many-one) reducible to a decision problem \(P_2 :Y \rightarrow \{\textit{yes}, \textit{no}\}\) if there exists an algorithm \(R :X \rightarrow Y\) (that takes an input from X and produces an output from Y) such that for every \(x\in X\), we have \(P_1(x)=P_2(R(x))\). In this case the algorithm R is called a reduction from \(P_1\) to \(P_2\). Depending on the time or space complexity of the algorithm R (i.e., the maximal number of steps or memory units consumed for inputs of size n), the complexity bounds of the problems are also transferred by the reduction. Usually one is interested in polynomial reductions, where the number of steps for computing each R(x) is bounded by a polynomial function in the size of x. In this case, if the complexity of \(P_2\) is polynomial, exponential, or doubly exponential (for deterministic or non-deterministic, time or space complexity), then \(P_1\) has the same complexity as \(P_2\).

A.2 Propositional Logic and SAT

SAT is a classical example of a non-deterministic polynomial (short: NP) problem: it can be solved using an algorithm that non-deterministically choses a propositional interpretation \(\mathcal {I}\), computes (in polynomial time) the value \(F^\mathcal {I}\) and returns \(yes \) if \(F^\mathcal {I}=1\) and \(no \) if \(F^\mathcal {I}=0\). It can be shown that each problem solvable by a non-deterministic polynomial algorithm has a polynomial reduction to SAT, which means that SAT is actually an NP-complete problem. Currently, the most efficient algorithms for solving SAT are based on (extensions of) the Davis-Putnam-Logemann-Loveland (short: DPLL) procedure, which systematically explores interpretations in a goal-directed way. A program that implements an algorithm for solving SAT is called a SAT-solver. Usually a SAT-solver not only decides satisfiability of a given propositional formula F, but can also output a model of F in case F is satisfiable.