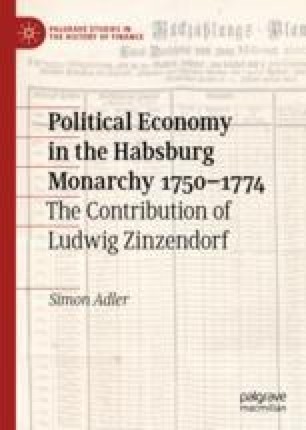 From the beginning of their association, Kaunitz had encouraged Zinzendorf to develop the skills to understand and evaluate the most advanced economic ideas. In this respect, the ‘Mémoire général des recueils des pièces de finance faites par Messieurs Fougerolles, Le Bret, de Vauban, du Guerin de Rademont, de la Jonchère, de M. Le Regent, d’un anonyme, de Boulainvilliers, de M. de Chevalier Renaut, de M. le Marquis de Silly, de M. l’Abbé de St.Pierre’ is revealing. The manuscript is part of Karl Zinzendorf’s Nachlaß and was intended as a manual for economic administrators. Its provenance is unclear, and the author’s name and date are not given. The document was probably written in the mid-1740s for Kaunitz while he served as the chief minister of the Austrian Netherlands. At that time, Kaunitz was involved in discussions to reform the finances of the province and support its economy. He probably gave the ‘Mémoire général’ to Zinzendorf as a study guide. In 14 chapters, the document dealt with the French economy and covered the key activities of agriculture, commerce and state credit. It also had separate sections on tolls and taxation as well as two chapters on begging and the celibate which discussed the productivity of citizens. In addition, the author presented an overview of England’s political system and its economy, and in the last chapter set out the operations of a new bureau économique to improve the French finances and commerce. Throughout the document, he used references and quotes from other writers and included some of their names in the title.

Cite this chapter as:
Adler S. (2020) French Intellectual Influence: Melon and Gournay. In: Political Economy in the Habsburg Monarchy 1750–1774. Palgrave Studies in the History of Finance. Palgrave Macmillan, Cham