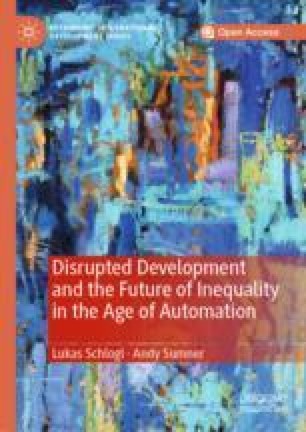 Developing countries face several policy challenges unleashed by automation. Given the pace of technological change, upskilling strategies are likely not to be a panacea. Safety nets and wage subsidies may be desirable, but the question remains how to finance them (without making labor more costly and thus exacerbating a trend toward replacement). Investing in labor-heavy sectors such as infrastructure construction, social, education or healthcare provision may be a way for developing countries to manage disruptive impacts of automation though these would imply major public investments and do not in themselves substitute for a long-run strategy for economic development.

The discussion thus far points toward the potential for major shifts in employment due to automation. This process will likely have sociopolitical consequences. Macroeconomic and labor market dynamics determine the quality, quantity, and distribution of citizens’ employment opportunities and thus of their wages, living standards, and class status. Such socioeconomic characteristics in turn have a profound bearing on sentiments of (in)security, relative deprivation, and societal equity which can influence political preferences and ultimately political outcomes. There is a large body of literature providing evidence for a causal relationship of this sort (see e.g. for the impact on electoral politics: Anderson, 2000; Lewis-Beck & Stegmaier, 2000; for the impact on political preferences: Finseraas, 2009; Mughan, 2018; see also the substantial literature on economic and class voting, as well as the literature on economic modernization and political values, e.g. Inglehart & Welzel, 2005).

The wider interest in the role of work and (un)employment as underpinnings of political agency goes back to early empirical social research (e.g. Jahoda, Lazarsfeld, & Zeisel, 1933), and even to the classical social theory of Karl Marx and Max Weber. As technological change influences labor market dynamics, an important field of research is the examination of modernization losers as political catalysts: specifically, so-called “technological anxiety” and resistance to innovation (see Mokyr, 1998; Mokyr, Vickers, & Ziebarth, 2015); the relationship of economic inequality, and political polarization and extremism (see Pontusson & Rueda, 2008); and the political implications of deindustrialization (see Iversen & Cusack, 2000).

Major political implications imply public policy responses. One can characterize policy responses to automation (Table 6.1). First, there is a class of policies that try to attenuate or reverse the automation trend. Among those, there are “quasi-Luddite” measures such as taxes and regulation that make domestic automation more (or even prohibitively) costly. Countries could also follow a strategy of what one could call “robot-substituting industrialization” where they impose tariffs on inputs/imports with nonhuman-produced contents. The problem with such strategies is that protectionism of labor is difficult to implement in an open economy. Luddite policies tend to be in conflict with integration into a globalized competitive market, as they assume that the economy can somehow be insulated from competition with automated production elsewhere. The mirror image of making automation costlier would be to reduce the costs of labor, e.g. by reducing income taxes or social insurance contributions, by reducing minimum wages, or costly labor regulations. The question is how desirable and politically feasible such strategies are.
Table 6.1

The space of potential public policy responses to automation

Second, there is a class of “coping strategies” for the trend toward automation. The most prominent one is to develop the skills of the labor force and (re)train workers in the APS. A widespread policy recommendation is to invest in skills and thus move the labor force away from automatable routine tasks. The problem with this approach is that (i) it is not clear what skills will be automation-resistant for a sufficient time to make the skills investment worthwhile and (ii) whether upskilling is at all realistic given the required time and monetary investment. Competition with currently available technology increasingly seems to require a tertiary education which is still very rare throughout the developing world. Given that even advanced industrialized countries are struggling to keep their labor forces competitive, the success of a skills development strategy alone remains questionable.

A second coping strategy would be to provide economic transition support as well as safety nets, unemployment insurance, or wage subsidies. This approach addresses the distributional skew which automation may create. However, such transfers presuppose the existence of a productive ARS in the first place, from which profits can be siphoned off for redistribution. In the absence of the existence of such a sector, there may be a case for the provision of international aid to support basic income guarantees or automation adjustment assistance overseas.

In many countries, one could say that the coping strategy adopted so far has been to invest in currently labor-intensive sectors such as infrastructure and construction. A—risky but potentially inevitable—long-term coping strategy for developing countries would be to anticipate automation trends and to try to (further) develop a productive post-industrial sector. If industrialization begins to look increasingly unattractive as a job creation strategy due to reshoring of hitherto outsourced production in value chains, countries would be well advised not to invest in the costly creation of manufacturing clusters but rather in the growth of a long-term ARS. Such an ARS could, for example, involve the social, education and healthcare sectors, and some forms of tourism, and infrastructure construction which are generally considered resilient despite increasing service automation. The problem with such an approach is that highly productive and tradeable services are skills-intensive, and non-tradable services (such as social care, personal services, etc.) are not (yet) highly value-adding, may not be sufficiently scalable, and may generally be too heterogenous to be targeted by post-industrial policies, in a similar way that industrial policies targeted the emergence of industrial clusters.

Cite this chapter as:
Schlogl L., Sumner A. (2020) Automation, Politics, and Public Policy. In: Disrupted Development and the Future of Inequality in the Age of Automation. Rethinking International Development series. Palgrave Pivot, Cham