The Art of Human Rights 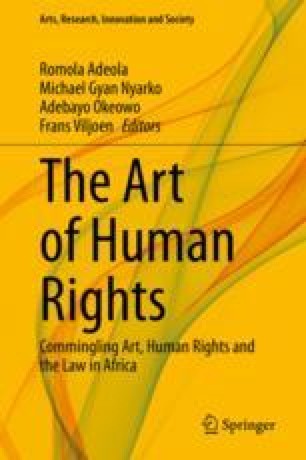 Arts, Human Rights and the Law in Africa: An Introduction

While arts, human rights and law are well established fields that have emerged and developed through knowledge systems that are rich and extensive in engagement, their confluence has become a significant point of interest in recent years. Arts are as ancient as Africa’s history. To understand Africa, and indeed, the culture of the continent, the role of arts is crucial. Prehistoric records reflect the use of rock arts in many parts of modern day Africa. As early as 8000 BC, arts were engraved on caves and even today gives us a sense of ancient African culture (Ofei 2008, p. 168). The Nok culture in Nigeria possesses notable terracotta sculptures with records doing as far back as 500 BC (Rupp et al. 2008, p. 284). Aside from the rich history of African Saharan trade, which was ‘the vehicle for the transmission of ideas’ (Isichei 1997, p. 218), African arts have been the vehicle of continental civilisation. In more recent years, the arts has become the mechanism for visual representation not only of African history but also communication of culture, feelings, power and knowledge. Across Africa, the arts has become a formidable expression of thoughts and a means of articulating reality in a form that simplifies truth and bolster resolve to advance change. In the human rights context, the arts has become a pertinent tool in expressing thoughts. In contemporary Africa, the potency of arts in human rights has been brought into light through various campaigns on the abduction of children by Joseph Kony in Uganda, the sale of migrants in Libya and the Bring Back Our Girls Campaign in Nigeria. While a plethora of examples abound on how arts has shaped the human rights narrative, scholarship on the intersection between arts and human rights law remains at its infancy. This book examines this intersectionality given the importance of arts in African expression. The arts serve as a formidable way of harvesting the voices of various groups. In recent years, it has become an important tool for engagement in view of the fourth industrial revolution and the power of visuals in representing pertinent issues. However, arts can also be used as to perpetuate dangerous stereotypes and propaganda machinery to entrench practices that violate human rights, usually of the most vulnerable in society. This book explores these intersectionalities within the African context. There are ten chapters in this book. The authors engage the subject of the arts from a plethora of perspectives: music, photographic silhouette, literature, photojournalism, soap operas, visual arts, sculpture and theatre. All ten chapters in this book were peer-reviewed in addition to the internal review process.