The Periodical Press in Nineteenth-Century Ireland 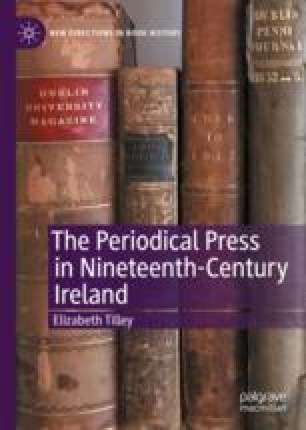 In 1871 the Bookseller printed an article praising The Irish Builder and its attention to the domestic book publishing industry, mentioning specifically Christopher Clinton Hoey’s series of articles on ‘Native Literature and the Publishing Trade’. The James Duffy referred to in the article had died that year but had been a strong presence in the Dublin publishing world since the 1830s. It was Duffy who was responsible for the invention of what critic Barbara Hayley has called, a “new kind of cosy family Catholicism”, providing a bewildering variety of periodicals to cater for it. Duffy’s productions were aimed almost exclusively at a domestic market in the 1850s–1860s, when overhead costs to publishers had begun to decline, rail transportation within Ireland made distribution easier, and the removal of the various taxes on knowledge, along with an increase in literacy rates, created a new market in the lower middle class. Duffy’s success was also partly dependent on the widening of the reading audience that accompanied Catholic Emancipation in 1829, along with the central regulation from 1831 of the national school system. Greater freedom for Catholics meant a flurry of activity in terms of church building, the formation of Catholic book societies, reading rooms and mechanics’ institutes, and the production and distribution of schoolbooks and religious texts to an energized population.

“The Bible Society in Dublin was very busy in distributing new Bibles in all directions, which the good Catholics at once carried to the pawnshops. These were purchased again by Mr. Duffy, who brought them over to Liverpool in huge sacks, and exchanged them for books more agreeable to the Irish taste.”

Cite this chapter as:
Tilley E. (2020) The Domestic Journal: The World of James Duffy, publisher (1830–1864). In: The Periodical Press in Nineteenth-Century Ireland. New Directions in Book History. Palgrave Macmillan, Cham