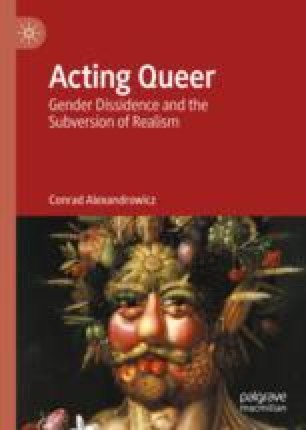 Alexandrowicz takes up a feminist critique of realism in “‘Queer-looking, Queer-acting’: The Subversion of Realism,” prompting a re-consideration of the work of Bertolt Brecht. Gender performance lends itself readily to the kind of ‘defamiliarization’ that is at the heart of the Brechtian project. This is followed by a survey of select examples of queer theatre in North America. Many have argued that the theatre, in order to (re)claim its legitimacy and relevance, must relinquish its devotion to psychological realism, which derives from the nineteenth century, given the superior capacities in this regard of film, television, and other media. The project of radical inclusion based on gender may inevitably take us to a reconsideration of the entire art form we know as ‘theatre’ in an age of sharpening environmental and political crises.