The Palgrave Handbook of Motivation for Language Learning 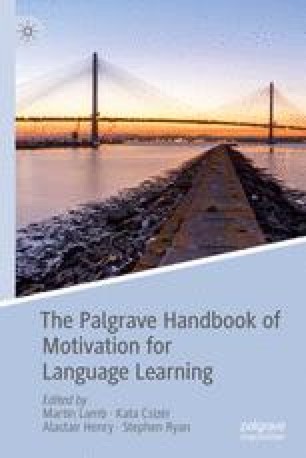 Motivation and the Unconscious

This chapter presents an overview of the role of unconscious motivation and its relationship to conscious motivation. It provides a commentary on interesting findings from mainstream psychology pointing to the pervasive role of unconscious processes in human motivation. The discussion is then linked to language learning, where comparable findings are found. These findings emerged from various instruments and methodologies, including the matched-guise test, the Implicit Association Test, the Single-Target Association Test, and qualitative observation. Finally some directions for future research are suggested.

An important consideration is how to measure an individual’s implicit attitudes if s/he is unaware of them and consequently cannot self-report them. One possible way is to use the Implicit Association Test (IAT, Greenwald et al., 1998), which is at present the most widely used measure of implicit attitudes. The IAT is a computerized reaction-time measure that simply requires classifying a series of words to the right or left as fast as possible. As an illustration of how this test works, Fig. 27.1 gives an example of the Flower–Insect IAT. This test measures how strongly the participant associates flowers and insects with good and bad. In the first part of the test (Fig. 27.1A), a stimulus appears in the middle of the screen (e.g., Roses) and the participant has to decide which box this stimulus belongs to and then press one of two designated buttons on the keyboard. In Fig. 27.1A, Roses belongs to Flower, and so the correct answer is the left box. Afterward, another stimulus appears (say, Cockroaches) and, again, the participant has to decide which of the four categories the stimulus belongs to in order to classify it to the correct box. The stimuli may belong to Flower (e.g., roses, orchids, tulips), Insect (e.g., cockroaches, mosquitoes, wasps), Good (e.g., smart, friendly, clean), or to Bad (e.g., dumb, enemy, dirty).

Note that this is not an attitude test per se. The stimuli are shown to the participant in advance with their correct categorization and, if they misclassify a stimulus, they get an error message immediately. The participant’s task is not to guess (or express their attitude about) the correct response, but to simply perform the test as fast as possible. Most participants therefore find the configuration in Fig. 27.1A very easy to perform and breeze through it.

In the second part of the test (Fig. 27.1B), Flower is paired with Bad while Insect with Good. This part suddenly feels considerably harder. This is because, in the first part, Flower and Good form one higher category (e.g., pleasant things), and Insect and Bad form another category (e.g., unpleasant things). Therefore, the participant in effect classifies the stimuli into only two—rather than four—categories (i.e., simply move all pleasant things to the left and unpleasant things to the right). In the second part, however, the participant has to sort the stimuli into the four categories (neither of the two pairs readily merges into one intuitive category), and so the task requires substantially more cognitive resources, resulting in slower performance.

This is why the two parts of the test (as in Fig. 27.1) are conventionally described as ‘compatible’ and ‘incompatible’, respectively. Compatible tasks are those that the researchers expect most participants to find easier (e.g., Flower–Good), while incompatible tasks are those that participants may find harder (e.g., Flower–Bad). This description also hints at why it is called the Implicit Association Test: implicit because participants find it hard to anticipate which configuration would be more difficult and are usually surprised by their own results, association because it measures the strength of the association of the categories in each pair, and test because it is a test of the participant’s performance speed. To the extent that categories of interest are paired with evaluative adjectives (e.g., good, bad), implicit attitudes are inferred from the response speed in the two parts of the test. The IAT is also flexible and can be easily adapted to measure implicit associations about various social objects, such as racial prejudice (e.g., White–Good, Black–Bad) and gender stereotypes (e.g., Male–Work, Female–Home). Further procedural details about the IAT are found in Lane, Banaji, Nosek, and Greenwald (2007). Readers can also try out demonstrations of the IAT at www.implicit.harvard.edu.