Feedback in L2 English Writing in the Arab World 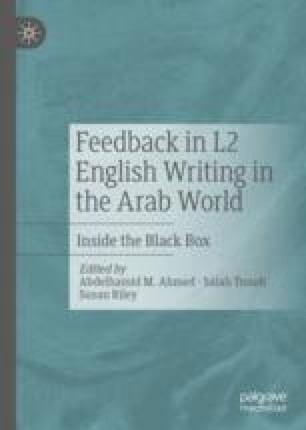 Various studies have reported on the importance of supervisors’ feedback as a determinant factor of students’ success in the postgraduate stage. Feedback “lies at the heart of the learning experience of a PhD student … it is through written feedback that the supervisor communicates and provides advanced academic training, particularly in writing, to the supervisee” (Kumar & Stracke, Teaching in Higher Education, 12(4), 2007, p. 462). This chapter aims to report findings as part of a wider exploratory study that investigated the academic writing difficulties of Saudi postgraduate students. The study focuses on supervisors’ written feedback to their students and their views on the academic challenges these students encountered. Nine supervisors across different disciplines at six universities in the UK provided samples of written feedback for this study. The data were analysed thematically to identify several themes and categories and the findings show that supervisors’ written feedback focused mainly on content knowledge, criticality, coherence, clarity, structure, vocabulary appropriateness, and grammatical and spelling accuracy.

Appendix 2: A Sample of Written Feedback from Supervisors

the belief that there is a world existing independently of our knowledge of it.

Thus, this independence of objects from knowledge weakens any content assumptions about the relation between them and renders it problematic (Sayer, 2000). What makes critical realism ‘critical’ is that the identification of generative mechanisms (which Bhaskar refers to) offers the prospect of introducing changes that can transform the status quo (i.e. stable things) (Bryman & Bell, 2007, p. 18).

Reed (2005a, p. 1637) reflects on the relevance, nature and consequences of adopting a critical realism approach as an investigative orientation in organisation and management studies. He points out that critical realism can offer a ‘coherent ontological’ grounds and ‘causal-explanatory’ method for determining fundamental structures and mechanisms which create ‘observable events’ and outcomes that may or may not be ‘actualised’ in particular historical contexts and social settings. Contu and Willmott (2005, p. 1646) indicate that ‘critical realism can assist in opening-up deep-seated issues in the philosophical standing of social and organizational analysis’. Pratt (2011) observes that the critical realism approach seeks a depth investigation of natural and social phenomena in which it attempts to identify the mechanisms operating in a context. He also indicates that critical realism attempts to go beyond the boundary of experience by suggesting the reality behind it. Moreover, a social phenomenon can often be ‘understood’ but not often ‘meaningfully measured’, hence its preference for qualitative methods (Fleetwood & Ackroyd, 2004). Looking at the world from this angle is best for exploratory and descriptive studies that seek to understand, investigate, and explain a phenomenon in depth as perceived by social actors.

For the aforementioned reasons, this research study will look at the research problem from a critical realism perspective, which prioritises ontology over epistemology and focuses on the mechanisms that produce events rather than the events themselves, more specifically as ‘structured’ and ‘differentiated’ (Bhaskar, 2008, p. xi), along with a qualitative method. The stratified reality offers insights in a series of ‘staggered layers’, each of which provides a foundation for the level above (Pratt, 2011, p. 15). This stratification with underlying generative mechanisms and causal structures provide a means to answer the research questions. Thus, critical realism can be seen as ‘a philosophy of science that provides a theory and model of social scientific explanation, based on a systematic form of … methodology, which combines historical, structural and processual analysis in a coherent and integrated framework’ (Reed, 2005b, p. 1664).

Both critical realism and institutional theory highlight the importance of social context and take a multi-level view of reality. Wry adopts Bhaskar’s domains of reality and argues that ‘structures’ which operate in the ‘domain of real’ is parallel to ‘institutional logics’, the ‘domain of actual’ is equivalent to ‘institutions’, and the’domain of empirical’ is similar to ‘practice’. In the ‘domain of real’, structures/logics have the potential, as frameworks, to generate phenomena and make them meaningful (Bhaskar, 1978; Thornton & Ocasio, 2008). These structures/logics play an important role in shaping patterns of behaviour in a context.

Thus, it allows for flexibility and variety of interpretive techniques that are essential for understanding a phenomenon in social science studies. Creswell (1996, p. 24) points out that:

[a] research problem needs to be explored [when] little information exists on the topic. The variables are largely unknown and the researcher wants to focus on the context that may shape the understanding of the phenomenon being studied.

Thus, a qualitative approach is best for investigating a little-known or poorly-understood phenomenon. It is also best for areas that mistreated, non-treated, or received very little attention in the literature. Whereas these areas, which have unknown variables, needs to be fully treated and covered sufficiently to open doors for future research which, in turn, are necessary to broaden the views and provide insights that contribute to the literature.

Qualitative research concerns the process rather than the outcomes or products (Merriam, 1988). It also concerns the meaning—the way people make sense of their lives, experiences, and structures of the world (Merriam, 1988). Within a qualitative approach, the researcher is inclined to be subjective. More to the point, when the research inquiry is on the basis of the participant’s perception and opinion, then the collected data is subjective data as the researcher’s knowledge can influence the research to some extent (Herndl & Nahrwold, 2000). Qualitative research is used to gain insights and better understanding about an individual’s experience and to have a sense of reality (Herndl & Nahrwold, 2000). It is also used in research that explores where and why knowledge and practices are at odds (Marshall & Rossman, 1989). Qualitative research often generates credible data for analysis by means of describing, exploring, or expanding existing knowledge and theories (Herndl & Nahrwold, 2000). Qualitative approach is often used for gathering an in-depth understanding of the research topic through various instruments (Easterby-Smith et al., 2002). These instruments include interviews, observation, case studies, and focus groups (Creswell, 1996).