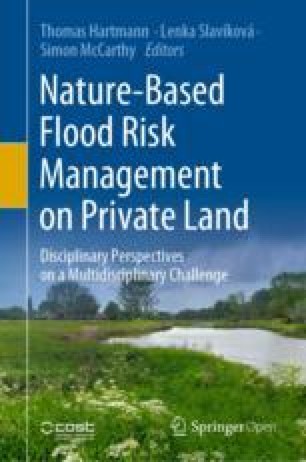 Water-based natural and human-induced disasters have been increasingly affecting communities worldwide, with single events causing extraordinary adverse social, economic and environmental consequences. Floods are among the most frequent hazards and led to an average annual loss in the EU of EUR 4.9 billion for the period 2000–2012, and may reach EUR 23.5 billion by 2050 (Jongman et al. 2014). Increasing vulnerability of population and infrastructures to floods is mainly driven by (i) urbanization trends, since the expansion of paved surfaces affects the hydrological cycle, particularly due to reduced infiltration and faster peak flows (e.g., Ferreira et al. 2018); and (ii) climate change, which will alter, among others, precipitation patterns, resulting in more intense and frequent storms. These trends have received growing attention on a global scale (Abdulkareem and Elkadi 2018), particularly because conventional flood control structures, based on technical and engineering-dominated approaches, are increasingly questioned among academics, decision makers and communities. Over the last years, a new approach for FRM has been rising, based on principles of resilience found in the natural world (Abdulkareem and Elkadi 2018). Mitigation and non-structural solutions tend to be potentially more efficient and sustainable to water-related problems, re-directing the focus away from structurally protective measures towards spatial planning and NBS (e.g., Kalantari et al. 2018).

The Blauzone Rheintal approach, in Austria, which involves establishing “blue zones” in local land-use plans, is an example of the “growing importance of land resources in flood risk management” (Seher and Löschner 2017). The Blauzone Rheintal system creates multiple co-benefits by securing the necessary land resources for implementation of NBS, such as using wetlands to create emergency flood capacity, reconnecting rivers with floodplains or relocating dikes to make more space for flood storage. It also contains regulatory planning instruments that provide important leverage for mitigating the impacts of floods and other natural hazards.

The potential of NBS is beginning to reframe the discussions and policy responses to implement mitigation measures against extreme water-based events. The term NBS is used here to describe soft engineering approaches that are aimed at increasing the resilience of territories and societies affected by meteorological events (Potschin et al. 2016). The NBS concept builds on and recognizes the importance of nature and highlight the requirement for a systemic and holistic approach to environmental change based on an understanding of the structure and functioning of ecosystems and the social ownership and institutional context within which they are situated. Nature-based solutions can be flexible and multi-beneficial for ecosystems, providing an alternative and/or complement to conventional engineering flood defence strategy. The EU has been devoted to support an approach involving a combination of defensive actions and adaptive management of natural resources (EU 2015).

Strategies for adapting to increasing flood risks and climate change should focus on prevention, protection and preparedness, as highlighted by the Floods Directive (2007/60/EC), and must be defined by a range of environmental and social factors (Loos and Rogers 2016).

A flood defence strategy should build upon flood hazard maps and flood risk maps, considering several flood scenarios including different possibilities such as return periods and land-uses, showing the potential adverse consequences of floods. The use of tools integrating Geographic Information Systems with hydrological modelling are very useful to prepare these maps, but the uncertainty of the results should not be ignored. Models require data calibration and validation based on long records of hydrological measurements, as well as a description of past floods. These data are not always available, raising uncertainties in flood scenarios that are not easy to quantify (Ceppi et al. 2010).

Flood risk management plans should focus on the potential to retain water in the landscape (e.g., Ferreira et al. 2015) and consider “more space for rivers”. The use of “blue” and “green” spaces to tackle runoff and other management issues, such as attenuation of peak runoff and water quality, is a less expensive and more long-lasting solution than “gray” infrastructures (e.g., Lafortezza et al. 2018). However, quantification of the effectiveness of existing large-scale NBS like Blauzone Rheintal, their operationalization and replicability in different local situations needs to be performed in a way that allows NBS to be both widely accepted and incorporated into policy development and practical implementation. Therefore, developing, implementing and upscaling NBS like Blauzone Rheintal requires gathering appropriate quantitative and qualitative information and utilizing this information to answer three key questions:

The range of evidence required to assess the effectiveness of NBS includes the bio-physical and economic aspects, social and behavioural data on levels of understanding, acceptance, implementation and sustainable management, and information about cost-effectiveness. With strong positive evidence, acceptance for NBS as risk-reduction strategies will become feasible, and they can be adopted by local communities with several advantages for ecosystem services (recreation, biodiversity, education, etc.).

Other countries may learn from cases like Blauzone Rheintal, which developed a regulatory instrument for FRM based on integration of different policy domains, particularly linked with water management and spatial planning, and involving public and private sector activities. This instrument incorporates sustainability aspects to prevent and reduce damages to human health, environment, economic activities and cultural heritage. Nature-based solutions often involve working with local communities, landowners, land managers and risk management officers, in order to achieve the threshold of intervention that is effective in reducing the risks from water-based hazards (SNH 2010).

In Sweden, the Kristianstad municipality in the Helge River basin is one of the front-runners regarding hydro-meteorological risk management. Situated in the middle of a wetland area, Kristianstad city has both struggled and developed together with the Helge River. Flooding is a problem in both rural and urban areas. In fact, Kristianstad is the most flood-prone town in Sweden, with parts of the town almost 2.5 m below sea level, and historical land-use actions such as embankments, lowering of lakes, straightening of flows and dredging, have reduced the wetland area and the landscape’s capacity to retain water. Rural parts of the basin (e.g., agricultural land and wetlands) thus face a recurring flood risk due to annual fluctuations in river water level. Embankments protect some more low-lying agricultural areas, but the land is vulnerable to severe flooding if they fail. The city itself is vulnerable to flows coming from upstream in the river basin, and when these flows are dammed back from the Baltic Sea by low land elevation, the drainage speed is reduced. With sea-level rise this damming effect will be greater, posing a high flood risk to Kristianstad. The city has long been working with strategies to prevent flooding, mainly involving structural measures (e.g., embankments). But during recent decades, the regime in Kristianstad has changed to a living-with-water approach, and the municipality is now looking into other possible future strategies, rather than business-as-usual (Johannessen and Hahn 2013). The Blauzone Rheintal regional plan for designating large-scale areas for flood retention and flood runoff can be relevant and practicable in the Kristianstad municipality. Such a regional plan in the area could include wetlands, sandy arable soils and meadows, developed in ways that benefit both the natural environment and human beings. For example, flooded grasslands could act as buffer zones for flood and nutrient-leaching prevention, and also provide new habitats for bird conservation. This new strategy will allow flooding of certain areas, but land-use is adapted to minimize its impact. The strategy also means synergies with nature and landscape development, having the “river as a partner” and benefiting from ecosystem services.

The importance of stakeholder engagement and participation in FRM has been recognized in several countries, such as the Netherlands and the United States (Loos and Rogers 2016). The involvement of local stakeholders in decision-making provides (i) improvement of the quality of decision making by using their information and solutions, since they are more acutely aware of specific vulnerabilities to flood and climate change, as well as local economic, environmental and social conditions (e.g., Loos and Rogers, 2016); and (ii) democratic legitimacy and trust, in order to enhance acceptance of decision outcomes (Edelenbos et al. 2017). Instead, public participation processes, as considered by other countries, are rather a simple process of hearing public comments and have left many stakeholders dissatisfied (Loos and Rogers 2016).

After decades of neglect, the importance of protecting and improving ecosystems for reducing disaster risk has started to receive attention in recent years (Gupta and Nair 2012). Considering the trends and changes in hydro-meteorological events, the approach to deal with natural hazards requires a change of paradigm, shifting from an approach relying exclusively on defensive action against natural hazards to an approach combining defensive action with adaptive management of natural resources (Cohen-Shacham et al. 2016). The ambition of the Blauzone Rheintal system is to facilitate this change in paradigm through operationalizing NBS, by designating large-scale areas for FRM, through intersectoral coordination and engagement of local stakeholders. There is international acknowledgement that efforts to reduce disaster risks must be systematically integrated into policies, plans and programs for sustainable development, and supported through bilateral, regional and international cooperation, including partnerships, particularly in the case of cross-border watersheds (ISDR 2005). A FRM program such as the Blauzone Rheintal offers new opportunities and brings added value, encompassing ideas and providing inclusion of local knowledge and lessons from the past (Eggermont et al. 2015). It is important to use all relevant sources of expertise in developing and implementing NBS like Blauzone Rheintal, and to identify the lessons learnt within and across the project (e.g., Nesshöver et al. 2017).

The NBS approach involves working with nature and, in essence, aims at increasing the natural capital of ecological systems, for example, reducing flood risk. To be successful, NBS must consider local social-ecological systems, so that local communities, landowners and land managers are engaged, in order to secure a threshold of interventions that can effectively reduce the risks from water-based disasters (SNH 2010). The concept underpinning NBS builds on, and complements, other concepts such as the ecosystem approach, ecosystem services, ecosystem-based adaptation/mitigation, disaster risk reduction, and green and blue infrastructure. All of these recognize the fundamental importance of working with nature and using a systemic, holistic approach to environmental change based on an in-depth understanding of the structure and functioning of ecosystems, and the social and institutional context within which they are situated.

The Blauzone Rheintal program was developed by distinct institutions which coordinate and support water management authorities, in cooperation with planners and decision makers. This approach provides effective long-term strategic plans for districts, cities or regions. A broader application of NBS into FRM requires integration among researchers, politicians and the economic sector, in order to provide evidence-base for NBS cost-effectiveness, co-benefits and up scaling benefits.

Open access of this chapter is funded by COST Action No. CA16209 Natural flood retention on private land, LAND4FLOOD (www.land4flood.eu), supported by COST (European Cooperation in Science and Technology).