Urban Heritage Along the Silk Roads 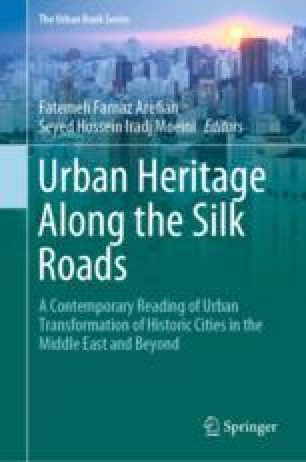 In the past decade, the city of Gaza has suffered from three consecutive wars in 2008–2009, 2012 and 2014. As a result, severe physical destructions impacted all aspects of urban life. The impact of destructions on historical buildings is undoubtedly of the most significant, because it represents a destruction of the identity and cultural history of Palestinian people, which is part of the world heritage that belongs to all. This chapter discusses a collaborative project between a local institution, the Architectural Center for Heritage (IWAN) at Islamic University of Gaza (IUG), and an international organization, the International Committee of the Red Cross (ICRC), for the post-war restoration of traditional houses after the 2008–2009 war that was implemented in collaboration with the residents of those houses. It provides a local perspective on a project-targeted 37 traditional houses in the Old City of Gaza that was partially affected by the war of 2008–2009. The study presents the stages of the work including documentation, awareness raising workshops, training, the cleaning phase and the restoration works. In addition, the study presents the challenges that faced the project, and how they were overcome. Financing was one of the challenges as it was limited. There was a need to define priorities of the most important works to be done. Another one was the lack of skilled workers and engineers which required training for them. Additionally, implementing the conservation works carried out while residents inside the house. The results show that it is possible to get a great achievement with limited resources. The project finance was for temporary job creation, and the partnership invested it to conserve the affected traditional houses. As a result of community participation, residents got awareness about the cultural value of their houses, and how to maintain them. This knowledge about the mechanism of maintenance contributed to its sustainability for future.