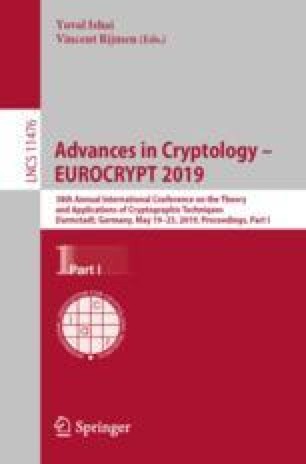 Annual International Conference on the Theory and Applications of Cryptographic Techniques

D-restricted FE allows for useful evaluation of constant-degree polynomials, while only requiring the SXDH assumption over bilinear groups. As such, it is a powerful tool for leveraging hardness that exists in constant-degree expanding families of polynomials over \(\mathbb {R}\). In particular, we build upon the work of Ananth et al. to show how to build indistinguishability obfuscation (\(i\mathcal {O}\)) assuming only SXDH over bilinear groups, LWE, and assumptions relating to weak pseudorandom properties of constant-degree expanding polynomials over \(\mathbb {R}\).

This paper is a merge of two independent works, one by Jain and Sahai, and the other by Lin and Matt.

We would like to thank Prabhanjan Ananth for preliminary discussions on the concept of a \(d\,+\,2\) restricted FE scheme. We would also like to thank Pravesh Kothari, Sam Hopkins and Boaz Barak for many useful discussions about our \(\mathsf {d}\varDelta \mathsf {RG}\) Candidates. This work was done in part when both Huijia Lin and Chrisitan Matt were at University of California, Santa Barbara.

Aayush Jain and Amit Sahai are supported in part from a DARPA/ARL SAFEWARE award, NSF Frontier Award 1413955, and NSF grant 1619348, BSF grant 2012378, a Xerox Faculty Research Award, a Google Faculty Research Award, an equipment grant from Intel, and an Okawa Foundation Research Grant. This material is based upon work supported by the Defense Advanced Research Projects Agency through the ARL under Contract W911NF-15-C- 0205. Aayush Jain is also supported by a Google PhD Fellowship in Privacy and Security. Huijia Lin and Christian Matt were supported by NSF grants CNS-1528178, CNS-1514526, CNS-1652849 (CAREER), a Hellman Fellowship, the Defense Advanced Research Projects Agency (DARPA) and Army Research Office (ARO) under Contract No. W911NF-15-C-0236, and a subcontract No. 2017-002 through Galois. The views expressed are those of the authors and do not reflect the official policy or position of the Department of Defense, the National Science Foundation, Google, or the U.S. Government.