Geodynamics of the Indian Plate 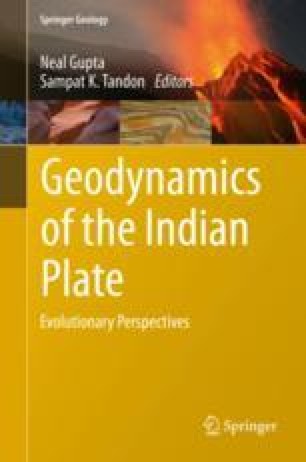 Geodynamics of the Indian Plate pp 1-4 | Cite as

Introduction to Geodynamics of the Indian Plate: Evolutionary Perspectives

The Indian region is a peninsula that is bordered by the Himalayan Orogen in the north, the Indian Ocean in the south, the Bay of Bengal in the east, and the Arabian Sea in the west. It forms part of the Indo-Australian Plate; and has four physiographic provinces—(1) the Peninsular, (2) the Indus-Ganga-Brahmaputra Plain, (3) the Thar Desert, and (4) the Himalayas. The geological structure of the Peninsula constituted of Central and Southern India evolved through the assembly of four major Archaean cratons and several Proterozoic mobile belts. The Precambrian basement of the Indian Shield together with the Precambrian sedimentary basins are overlain by the sedimentary sequence of the Himalayan Foreland, in the north and the end-Cretaceous Deccan Flood basalts in the west and central regions of India. Basins related to rifting episodes of the Indian landmass—the Gondwana basins and the pericratonic basins along the eastern and western margins of India—formed in the Paleozoic-Mesozoic. In the Cenozoic, the Himalayas and its foreland were initiated and continued to develop in response to the northward migration of the Indian Plate, and its subduction beneath the Eurasian Plate and collision. These latter geodynamic events resulted in the development of strong interconnections between mountain-building, climate, and erosion—a subject that has continued to hold attention over the past few decades. The geodiversity of the Indian Plate is remarkable and as seen from the above account has been developed through the last 4 billion years of Earth history. The present volume attempts to provide glimpses of the evolutionary trajectory that has led to the geodiversity of the Indian Plate.