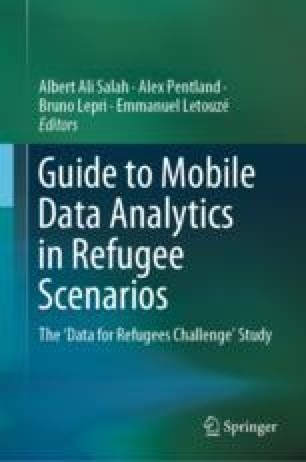 This study aims to shed light on various aspects of refugees’ lives in Turkey using mobile call data records of Türk Telekom, enriched with numerous local data sets. To achieve this, we made use of several statistical and data mining techniques in addition to a novel methodology to find home and work-time anchors of mobile phone users we developed. Our results showed that refugees are highly mobile as a survival strategy—a significant number of whom work as seasonal workers. Most prefer to live in relatively low-status neighborhoods, close to city transport links and fellow refugees. The ones living in these neighborhoods appear to be introverts, living in a closed neighborhood. However, the middle- and upper-class refugees appear to be the opposite. Fatih, İstanbul was found as an important hub for refugees. Finally, the officially registered refugee numbers do not reflect the real refugee population in Turkey. Due to their high mobility, refugees lag behind in keeping up-to-date information about their residential address, resulting in a significant discrepancy between the official numbers and the real numbers. We think that policymakers can benefit from the proposed methods in this study to develop real-time solutions for the well-being of refugees.

We would like to thank Türk Telekomünikasyon A.Ş. for the one-year anonymized mobile communication data they provided within the D4R Challenge.

In order to extract the important places of individuals, we study their fine-grained mobility using DS2. More specifically, we try to find WAP and HAP for each MOU. To be able to find those points, first we aggregate the hourly call counts for each MOU and we apply a median filter with the bandwidth of three to hourly call signal to smooth unexpected low and high values of call counts out. As depicted in Fig. 18.16, after the median filter is applied, the hourly call counts signal is smoothed.
Then, we sort the hours according to the number of calls made during that hour in ascending order. We select the hours in the first quartile and three hours before that as the Home-Time Period (HTP) assuming that this period is spent during the most probable HAP. After that, we find the Work-Time Period (WTP) by first adding four hours, which is allocated for preparation and commute, to the end of HTP and selecting the next six hours, which is assumed to be a safe period for work activities for most of the people, as the WTP. In Fig. 18.17, HTP and WTP have been marked on the filtered data.
After finding the HTP and WTP, we derive the BTS used in those periods to find HAP and WAP. First, we find the HAP by sorting BTS by the number of unique days they used and we select the one with the highest number of unique day usage. In the next step, we cluster the BTS using Hartigan’s leader clustering algorithm. The advantage of the Hartigan’s leader algorithm is that, unlike clustering algorithms like K-means, we do not need to set the number of clusters at the beginning. We only need to set the radius to cluster the BTS based on their proximity. We set the radius as 1 km. After clustering BTS data, we select the cluster, in which the BTS with the most call days resides and then set the centroid of the cluster as HAP. In order to find the WAP, on the list of possible BTS for WAP, we apply the same steps by applying the Hartigan’s leader algorithm and then select the centroid of the cluster in which the BTS has the most number of call days in weekday usage. Aside from the hour differences between the HTP and WTP, to specify the WTP, we only look at the calls made or received on the weekdays within the designated work-time hours. In Fig. 18.18, we present the possible WAP, which is represented by the green circle, and HAP, which is represented by the red circle—locations for a MOU living around Siteler, Ankara.

In SOM clustering, we trained the neural network until the average distance between the data points and the node centroids converged to a relatively small distance and then, we get the codes plots of the clusters, as can be seen in Fig. 18.19. If we are to analyze some of the clusters, for instance, in Node 1 (enumeration starts from the bottom left and ends at the top right), we observe that MOUs in this node have higher entropy while having close to zero radius of gyration and they visit very few numbers of different cities. As their HAP and WAP locations are very close, their daily commute is expected to be small. Even though they visit different numbers of BTS and districts, their travel distance is relatively small and they conduct their daily activities in a very small area by visiting a lot of different places, which are very close to each other. On the other hand, for Node 6, we see that MOUs in this node have low entropy and high radius of gyration indicating that these MOUs are making longer commutes, especially in the work-time periods, while visiting a fewer number of different places. Additionally, larger commutes were also confirmed by the larger distance between HAP and WAP locations. Lastly, we observe MOUs in Node 10 having only higher values of radius of gyration in the home-time period while other features like entropy, radius of gyration in work-time period, number of different cities visited, and WAP-HAP distance are small. Hence, we can deduce that these MOUs are making larger commutes in their home-time period but they are not visiting different places in terms of BTS, districts, or cities and their HAP and WAP locations are very close to each other.