Kant on Maxims and Moral Motivation 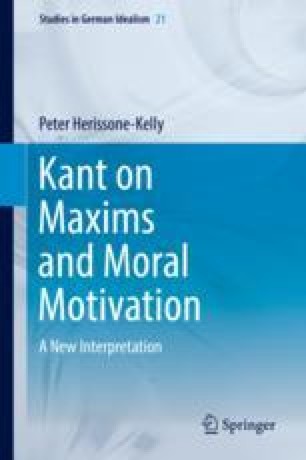 Kant on Maxims and Moral Motivation pp 1-11 | Cite as

This introductory chapter presents two problems that might appear to attach to Kant’s moral philosophy: the problem of misdirected moral attention, and the problem of experiential incongruence. The first problem arises because it seems that, for Kant, when an agent acts from the motive of duty, she acts simply because the maxim of her action is lawlike. This suggests that the good-willed agent’s attention, when she acts from duty, is focussed on the nature of her maxims, rather than on the situations that confront her. This, it is urged, is an unsatisfactory account of morally worthy action. The second problem arises because Kant’s account of moral reasoning appears not to harmonise with the lived experience of moral agency. The central challenge that the book must meet, then, is to show how these problems really do not attach to Kant’s moral thought at all. A brief outline of the book’s aims, structure, and content is provided.

And the end of all our exploring

Will be to arrive where we started

And know the place for the first time.