Complex Networks and Their Applications VII 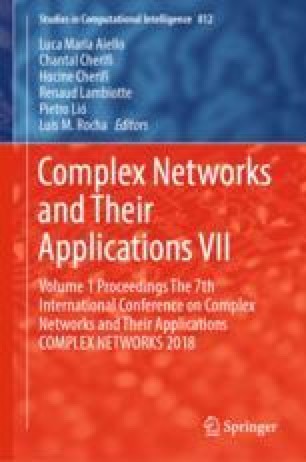 International Conference on Complex Networks and their Applications

Models of percolation processes on networks currently assume locally tree-like structures at low densities, and are derived exactly only in the thermodynamic limit. Finite size effects and the presence of short loops in real systems however cause a deviation between the empirical percolation threshold \(p_c\) and its model-predicted value \(\pi _c\). Here we show the existence of an empirical linear relation between \(p_c\) and \(\pi _c\) across a large number of real and model networks. Such a putatively universal relation can then be used to correct the estimated value of \(\pi _c\). We further show how to obtain a more precise relation using the concept of the complement graph, by investigating on the connection between the percolation threshold of a network, \(p_c\), and that of its complement, \(\bar{p}_c\).

Appendix: Definition and Properties of the Complement Network