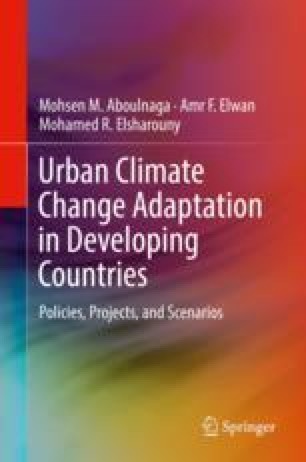 This chapter presents the assessment of climate change (CC) impacts and scenarios as well as the simulation measures and tests of the applicability in urban areas in order to anticipate and predict climate change impacts and scenarios. It also illustrates the selected case study representing a housing project in an urban area in a developing country that is characterised as a hot-arid climate. The study simulates the urban microclimate in terms of the urban metaphor and setting from baseline year 2016 and compares it to that in 2080 in order to evaluate CC impact. In addition, the assessment tests six measures, including cooling passive design configurations, buildings’ elevation, buildings’ envelope, vegetation, water features and orientation and high albedo, to identify their impact on the adaptation scenarios to heat stress and comfort. The CC weather scenarios for 2080 were generated using CCWorldWeatherGen, which is based on the IPCC Third Assessment Report. This chapter also looks at the role of environmental design in CC adaptation. Since urban development is part of climate change adaptation action, it is imperative to investigate if such action was implemented on new projects and if forecast weather is meeting the CC adaptation measures.